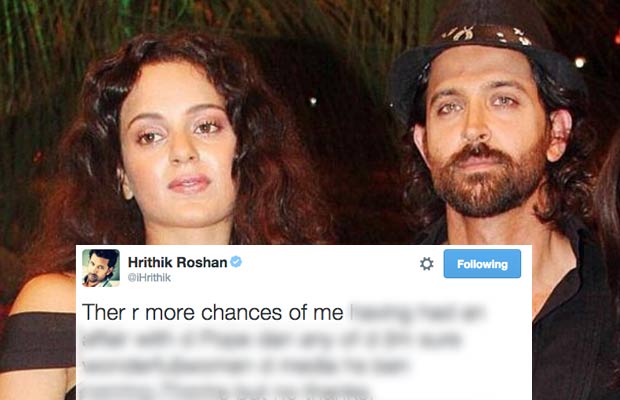 [tps_footer]Kangana Ranaut and Hrithik Roshan were much in headlines for their secret bond. The two highly talented actors who were rumored to be dating each other have been mum about the same since a long time. Well, recently Queen actress Kangana almost spilled the beans on her rapport with Hrithik. Recently at an event, the gorgeous actress garnered all the attention when she indirectly referred to Hrithik as her ex.

The Tanu Weds Manu Returns actress was asked whether the Bang Bang actor was the reason of her exit from the film ‘Aashiqui 3′. The daring starlet revealed in affirmative saying yes. The talent bundle further added that she fails to understand why exes do silly things to get attention. Well, taking back the words, she concluded by saying that she doesn’t want to dig the grave yet again.

Evidently, Kangana Ranaut was caught hinting at none other than Hrithik Roshan. The statement surely came as a shock to everyone. However, the Greek God of the tinsel town Hrithik Roshan has now replied indirectly to the actress on the micro blogging site Twitter saying, “Ther r more chances of me having had an affair with d Pope dan any of d (Im sure wonderful)women d media hs ben naming. Thanks but no thanks.” 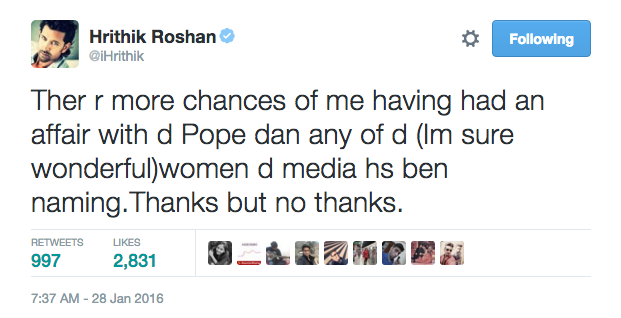 Well, Hrithik who has just passed through an emotional turmoil after separating from wife Sussanne is in no mood to give more air to the speculations. The actor clearly stated that he would rather have an affair with the Pope than Kangana.

We hope that the cold war between the two actors end soon![/tps_footer]