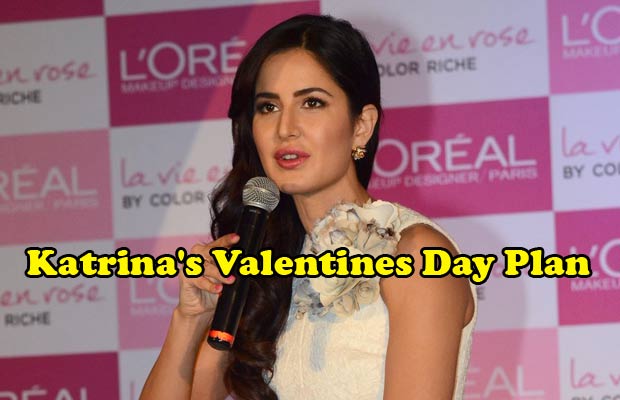 [tps_footer]Katrina Kaif as we all know is single now. After parting ways from actor Ranbir Kapoor, Katrina has been bombarded with questions regarding the same. The Fitoor actress who is undoubtedly going through an emotional turmoil is nonetheless putting up a brave face to all the speculations and rumors. Recently, the actress was swarmed by questions about her personal life at a product launch event.

The Bang Bang actress who is looking forward for her upcoming release ‘Fitoor’, opposite Aditya Roy Kapur is tied up with the ongoing promotions of the film. Seems like, the personal hassle has come at the wrong time for Kat when she has to face shutterbugs almost every day. Recently, the beautiful star was asked about her expectations on the upcoming Valentine’s Day. The talented star stated calmly, “I’m actually hoping to receive a big bunch of flowers from my director Abhishek Kapoor along with a card saying ‘this journey on Fitoor has been great.”

As we all know this Valentine’s Day will be a lone one for Kaif as she has broken up with Ranbir. The actress however was all confident and did not show any emotional stress amidst the lenses. After loads of questions reflecting at her personal life, Katrina clarified, “I’m a person who believes in having all the information and being realistic, but I also like to have a positive outlook because that’s a good way to live. I prefer seeing the glass as half full and not thinking too much about the future. Like my mother says, just take one step at a time. Have faith in God and just trust.”

The starlet further added, “Speculations and assumptions are all part of being an actor. It’s a small unpleasant aspect of the profession. But I enjoy being an actor because there are so many other great parts of the job to focus on. Being an actor offers one so many privileges and opportunities.”

When Katrina was asked about her any secret or known admirers the star suggested smartly, “No, you asked me who I wanted the flowers from. People can have a lot of expectations.”

Seems like, Katrina Kaif wants to keep her personal life at bay currently and concentrate only on her film. ‘Fitoor’ is all set to hit the screens on February 12th, 2016.[/tps_footer]