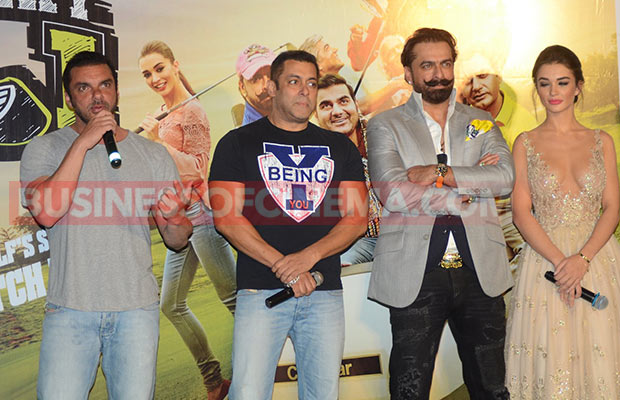 At the trailer launch of Freaky Ali, along with the cast, Salman Khan was also present at the venue. Directed by Sohail Khan, the film stars Nawazuddin Siddiqui in the lead role. Salman told the media that he wanted to be a part of the film, but Sohail refused to cast him.

The Sultan actor stated that he even asked Sohail to cast him for several characters, but he took Arbaaz. He further added that Freaky Ali was made in 38 days and if were to cast in the film, it would take 138 days for its completion.

Well, Salman was in a mood to joke around at the trailer launch. He even spoke about how different the film is and wished luck for the cast. Freaky Ali will be Sohail’s fifth directorial. The film is about how a middle-class man masters the game of Golf, which is usually considered as rich man’s sport. Nawaz is seen in a never seen role before. He really looks hilarious in the entire trailer. Viewers will also witness cute chemistry between Nawaz and Amy Jackson.

The film also stars Arbaaz Khan in a pivotal role. It will hit the screens on September 9, 2016. Freaky Ali will clash with Katrina Kaif and Sidharth Malhotra’s Baar Baar Dekho.

As far as Salman Khan is concerned, his last release Sultan has turned a blockbuster at the box office. He is in Ladakh now to shoot for Kabir Khan’s next Tubelight.