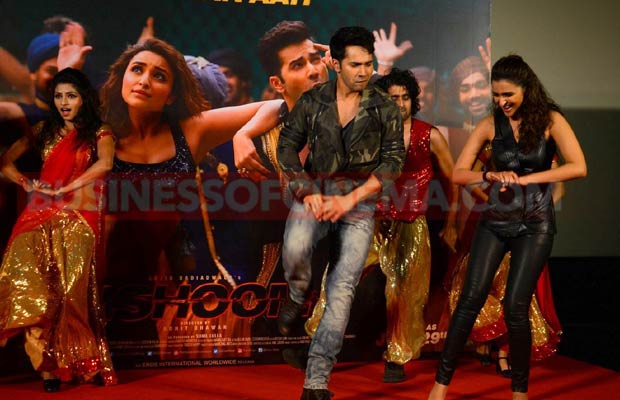 [tps_footer]Bollywood actor Varun Dhawan not only shares crazy experiences while shooting but he also makes sure that he is at his best while promoting his films. The handsome hunk made an eye-grabbing entry on a classy vehicle today at the launch of song ‘Jaaneman Aah’ from Dishoom. Even the little kids were surprised to see the actor making such a grand and unique entry.

Talking about the newly released song, both Varun Dhawan and Parineeti Chopra are nailing it with their amazing dance moves. The song features handsome hunk Varun in his usual energetic style. Talking about their song, Varun said, “We wanted to recreate the 90s vibe. So yes we tried creating it. Govinda-Karisma were the inspiration”

At the song launch, Parineeti Chopra was in all praise for Varun Dhawan. Thanking Varun for helping her in weight loss, Pari said, “Today I have abs because of Varun. I was working on myself & wanted to show.He offered me the song, I agreed.”

Parineeti Chopra also shared that how excited she was to work with Varun Dhawan though they have done many ads together. “Varun and I have worked on many ads. But we never got any film offered together. Hopefully, will get now,” says Parineeti

In fact, the actress referred Varun as her first co-star and not Ranveer Singh with whom she debuted in Bollywood. “Technically he is my first co-star,” Pari said.

To this, Varun naughtily said, “Don’t say that Parineeti. Arjun and Ranveer will feel bad.”

While Varun Dhawan’s crackling chemistry is in full swing with Parineeti Chopra, the actor was asked what type of ‘Jaaneman‘ does he want in his life. People expected that he will hint something on his alleged girlfriend Natasha Dalal but instead referred to Pari saying, “Mujhe jaisi jaaneman chahiye woh qualities Parineeti main hai. She is hardworking, sleeps early and eats on time.”[/tps_footer]