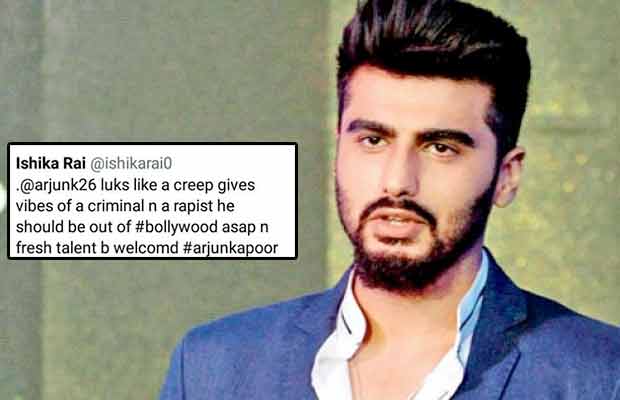 Trolls have become very common in the Bollywood film industry. Every now and then, we see the common public trolling the film stars on some or the other matter. And it seems that the celebs have become quite used to it by now. As most of them do not pay any heed to any of such trolls. But still the trollers continue to target the stars. And the latest one is the actor Arjun Kapoor.

A female twitter user shared an article on the ‘products of nepotism’. In the same, she tagged along a few celebs including Arjun. The user even called the actor as someone who looks like a creep and rapist. She tweeted saying, “.@arjunk26 luks like a creep gives vibes of a criminal n a rapist he should be out of #bollywood asap n fresh talent b welcomd #arjunkapoor”

The actor did not take long to shut the troller with his befitting words. He tweeted back saying, “This is an all time low at trolling I feel…a woman, a girl shamelssly and causally using the term rapist isn’t trolling it’s saddening” 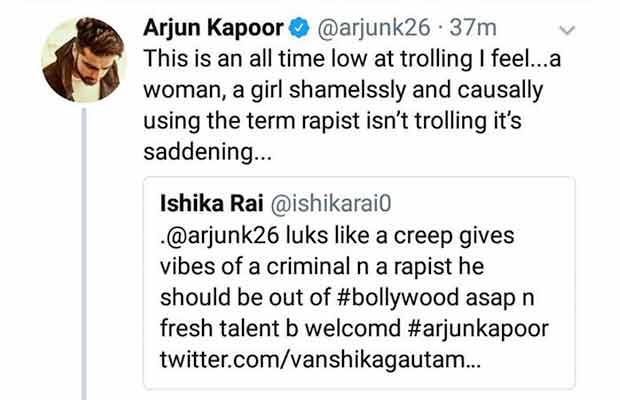 Arjun’s tweet made that realize her mistake and she deleted her post soon. Well, that was a nice way of handling a troll. Wasn’t it?

Talking about the work front of the actor, Arjun Kapoor was last seen in the film Mubarakan, which was a success at the box-office. Currently, he is a part of two films. One is Dibakar Banerjee’s Sandeep Aur Pinky Faraar. Another is Vipul Shah’s Namastey Canada, which is the sequel to Akshay Kumar’s Namastey London. Interestingly, in both the films, Arjun is paired opposite his debut film co-star Parineeti Chopra.