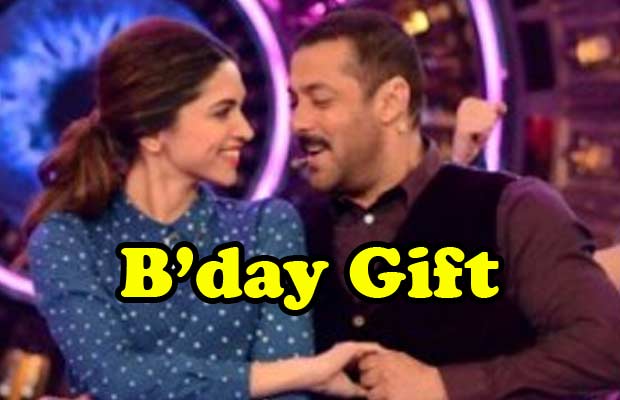 [tps_footer]Filmmakers surely want to cast Salman Khan and Deepika Padukone together in their projects. Many rumors are making headlines suggesting that Deepika and Salman might soon be seen together on the silver screen. Not only do the makers feel that they make for an amazing on screen pair, the fans are also waiting to see them together. Well, even though there is no announcement on casting them together, Deepika Padukone has decided as to what she wants to gift Salman Khan on his birthday.

Deepika as we all know is on a promotional spree for her upcoming film ‘Bajirao Mastani’, the gorgeous actress is day in and day out attending press events and various media platforms. Recently, during one such media gathering, Deepika was asked what she would like to gift Salman Khan on his birthday. As we all know, Salman is soon going to enter the 50s club and the masses are going gaga over the same.

With sheer smartness, Deepika answered saying, “I would like to gift him a bride.” Salman’s marriage has been like a national concern since many years. Every now and then speculations wander off regarding Salman’s marriage. However, seems like Deepika Padukone also is eager to see Salman Khan get hitched.

Salman Khan who has just got relief from the 13 year long hit and run case is making headlines for his alleged 2016 marriage scenes. The actor is rumored to tie the knot in the coming year. Well, we are surely impressed with Deepika Padukone’s choice of gift, must say.

The mind blowing actress, Deepika Padukone is all geared up for her big release ‘Bajirao Mastani’. The film is hardly a day away from its release. Directed by Sanjay Leela Bhansali, the film also features actors Ranveer Singh and Priyanka Chopra in lead roles. ‘Bajirao Mastani’ is all set to hit the screens on December 18th, 2015. The film will witness a major war with Rohit Shetty’s ‘Dilwale’ which releases on the same date.[/tps_footer]