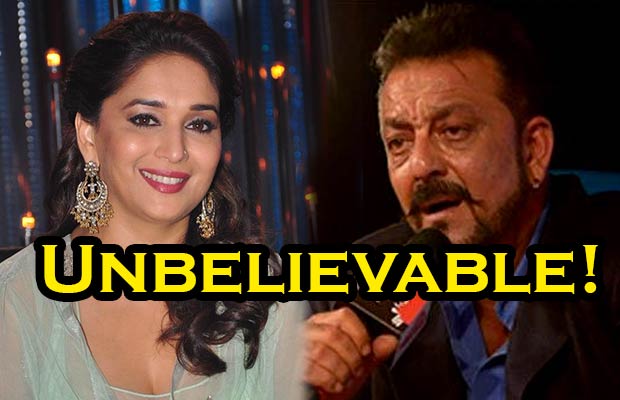 [tps_footer]By now we all know Rajkumar Hirani is all set to make a biopic on Sanjay Dutt, which will see actor Ranbir Kapoor stepping into the shoes of Dutt. While the shooting of the film is yet to begin, reports are doing rounds that actress Madhuri Dixit, who was once a close friend of Sanjay Dutt, called up to the actor after 25 years. Wondering why?

Wondering what Madhuri Dixit has to do with Sanjay Dutt’s biopic? For those who don’t know, Madhuri and Dutt were rumoured to be dating back then. Yes, this is the reason why the actress called Sanjay Dutt as she wanted to know if the biopic includes anything to her reference. Reportedly, ‘Aaja Nachle’ actress was relaxed after Dutt made sure that Hirani won’t make any reference to her in the film.

Before Sanjay Dutt was arrested in 1993, the actor was allegedly dating Madhuri Dixit. After his wife Richa Sharma died due to cancer, the Munnabhai actor was very much depressed and was into dru**. Sanjay Dutt badly needed a shoulder to cry on and that’s how he got close to Madhuri Dixit. Reportedly the love blossomed between the two, but  the rumoured love didn’t last for long.[/tps_footer]