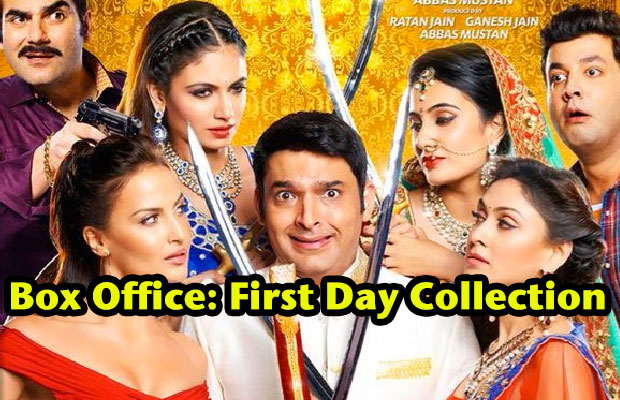 Kapil Sharma’s much in limelight debut film ‘Kis Kisko Pyaar Karoon’ has finally hit the screens. Stand-up comedian Kapil who earned fame from the show ‘Comedy Nights With Kapil’ has finally stepped in the Bollywood industry.

The out and out comedy flick ‘Kis Kisko Pyaar Karoon’ has gained surprising results at the box office. With amazingly low promotions and no media glare, Kapil Sharma’s debut film has gained a good occupancy rate of 30%-35% on average. The occupancy rate of ‘Kis Kisko Pyaar Karoon’ is impressive in a way that it has relatively all new entrants in main leads.

The shows of the comedy film are kept at an average of about 5 to 7 shows which is a considerate amount. The movie further has gained an advantage of the holiday of Bakri Eid which marks more audience at the theaters. With a good response and the occupancy rate, ‘Kis Kisko Pyaar Karoon’ has displayed better results than most recent films.

The opening of the film concludes that the movie is for the masses and will generate more collections in the weekend that will follow. The movie had a competition with ‘Calendar Girls’ helmed by Madhur Bhandarkar, but the women centric film lacked behind in attracting the audience as it was not a crowd puller whereas Kapil Sharma’s comedy flick was a family entertainer which proved to be an added advantage for the film to gain more crowds at the screens.

The hilarious movie is helmed by Abbas-Mustan and the story is of a man who handles his four wives simultaneously. ‘Kis Kisko Pyaar Karoon’ will now have to depend on mouth publicity and the content of the film will be a decision making point whether the movie becomes a hit or no.