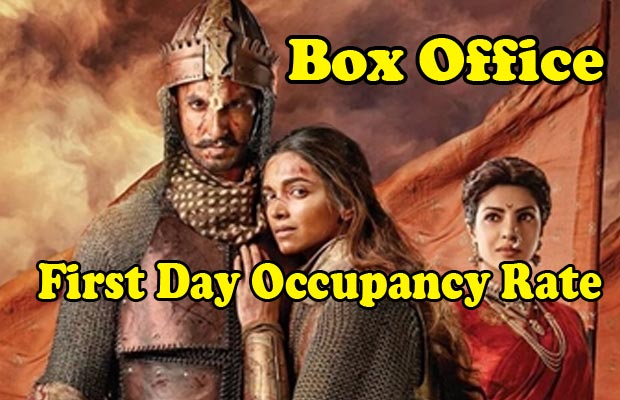 [tps_footer]Bollywood film ‘Bajirao Mastani’ starring Ranveer Singh, Deepika Padukone and Priyanka Chopra has opened to a mediocre start. Due to its clash with Dilwale starring SRK, the film has lagged far behind in terms of occupancy rate. ‘Bajirao Mastani’ has an occupancy rate of only 30% approx which is far less even by Sanjay Leela Bhansali’s standards. The film badly needs to cope up during the evening in order to compete with its competition release, or else things do not seem good for the film with respect to its first day collection.

‘Dilwale’ is currently emerging as the front runner with occupancy rate of 65% which is more than double of ‘Bajirao Mastani’. ‘Dilwale’ is dominating all the regions including Gujarat which is the deciding factor for SLB’s movie. As predicted earlier ‘Bajirao Mastani’ needs a lot of push to compete with ‘Dilwale’ as the film purely depends on word of mouth. The film is performing well in prime regions of Mumbai and Pune where the Maratha based film is sustaining well.

The film being based on Maratha culture, it is less likely to cause a stir in the Northern regions of Delhi and UP. Especially UP side which has rarely ever responded well to Sanjay Leela Bhansali movies other than ‘Devdas’. Considering the large scale at which the film has been made, ‘Bajirao Mastani’ cannot afford to have occupancy rates like previous SLB films. But here the film has not even performed like the previous releases of the director that all ranged between 40-50% occupancy rate. This is due to the clash with Dilwale.

However due to the clash between these two films, ‘Bajirao Mastani’ has got lot of word of mouth and publicity, which it otherwise wouldn’t have received if it released alone. After the mediocre occupancy rate due to which the film is lagging behind, we hope to see some improvement till evening and wait to see the first day collections.[/tps_footer]