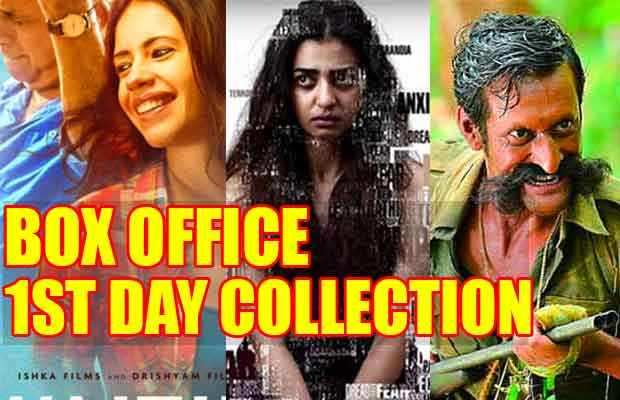 [tps_footer]Three Bollywood films – Radhika Apte’s ‘Phobia’, Ram Gopal Verma’s ‘Veerappan’ and Kalki Koechlin-Naseeruddin Shah’s ‘Waiting’ released yesterday at the Box Office. All the three content oriented films have opened to a very poor collection at the Box Office on its first day. RGV’s ‘Veerappan’ has been called as his best film so far by the critics and the film has also managed to collect decent collection among other releases.

The approx. first-day collection of Veerappan is Rs 1.25 crore (12 million) while other releases ‘Waiting’ and ‘Phobia’ have managed to fare Rs 20 Lakhs (2 million) at the Box Office. Though RGV’s Veerappan is leading ahead in collections against ‘Waiting’ and ‘Phobia’, but it was Kalki’s film ‘Waiting’ that showed good growth over the day with the best occupancy. Now it remains to see if ‘Waiting’ shows a good growth on Saturday and Sunday with such low figures on the first day of its release.

On the other hand, ‘Phobia’ has been receiving good reviews but it seems film is not offering good thriller to the audiences in theatres. The characters of the each film have been widely appreciated by the critics but it seems this did not help the films to mint good numbers at the Box Office.

Well, now all the eyes are on which film manages to survive at the Box Office during the weekend as Aishwarya Rai Bachchan’s Sarbjit, which is the big release of last week, still holds high at the Box Office in its second weekend.[/tps_footer]