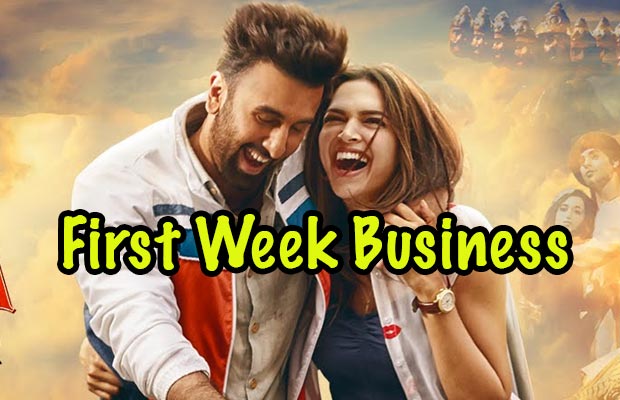 [tps_footer]Bollywood film ‘Tamasha’ starring Ranbir Kapoor and Deepika Padukone has finished its first week run at the box office as expected. The film was speculated to cross the 50 crore mark before its second weekend starts and has successfully managed to do so. Despite the considerable fall over the weekdays, the film collected Rs. 53 crore net approx (Rs. 530 million) which is the eighth highest first week of 2015. The film does not face much competition from the recent releases but will be affected nonetheless due to the drop over the weekdays.

Surprisingly the South side gave splendid performance with Mysore having its fourth highest week of the year with ‘Tamasha‘. Mumbai collected Rs. 18 crores net approx and collections from Delhi/UP were around Rs. 10 crores net approx. The film should have performed better in Delhi regions given the fact that two biggest stars Ranbir Kapoor and Deepika Padukone had teamed up once again. However the same magic could not work this time as ‘Tamasha’ received lesser than expected reaction from audience.

Ranbir and Deepika are however being praised and will probably continue to be termed as one of the best on screen couples. With ‘Hate Story 3′ releasing with a strong hold of up to 35% occupancy at the box office, ‘Tamasha‘ will surely be affected a little but not a lot as both the films cater to different audiences. Where ‘Hate Story 3′ is an adult story and has a legacy of two prequels preceding this one. ‘Angry Indian Goddesses’ also will not prove to sabotage the business left for ‘Tamasha’ over this weekend.

If the performance of today, Saturday and Sunday prove to be anything like its opening weekend, ‘Tamasha’ still has a good chance of touching at least the 70 crore mark. But only time will tell if it is able to do so by competing with ‘Hate Story 3’.[/tps_footer]