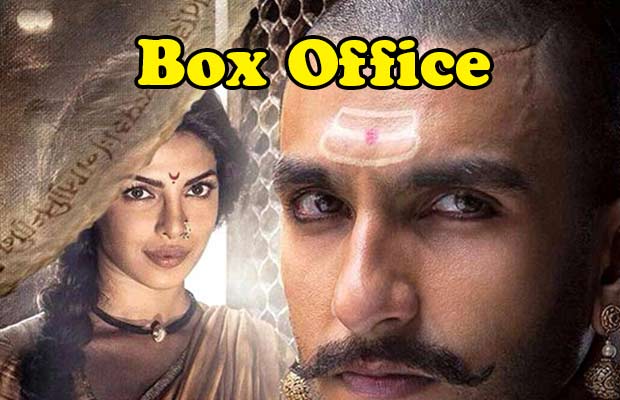 [tps_footer]Bollywood film ‘Bajirao Mastani‘ starring Ranveer Singh, Deepika Padukone and Priyanka Chopra is going great on its first weekday run. The Monday collections of the film were great with only a little drop compared to the opening day collections. Tuesday business has been marvelous for ‘Bajirao Mastani’ as the film experienced only 5% drop and is going rock solid in its weekday run. The film collected Rs. 9.5 crores net approx (Rs. 95 million) on Tuesday which is a great number given the tough competition with ‘Dilwale’. The film is expected to have Rs. 80 crore net approx collections in first weekday run.

‘Bajirao Mastani’ has been getting lot of good word of mouth in India as well as in foreign countries where the film has performed well, but not better than ‘Dilwale’. Compared to ‘Dilwale’ the first Monday business of ‘Bajirao Mastani’ has been better as the former experienced major unexpected drop in its collection compared to Sunday. Even on Tuesday the film has surpassed ‘Dilwale’ collections which is a good sign, given the fact that the SRK film almost stole the show during the first weekend.

The great start on Monday ensures a steady weekday run ahead as it is very important for a big budget movie like this to sustain over the weekdays. The film can expect to perform well due to the holiday factor on its second weekend as well. The main performance of ‘Bajirao Mastani’ can be on the second week as the hype is more and ‘Dilwale’ is facing backlash due to ongoing protests.[/tps_footer]