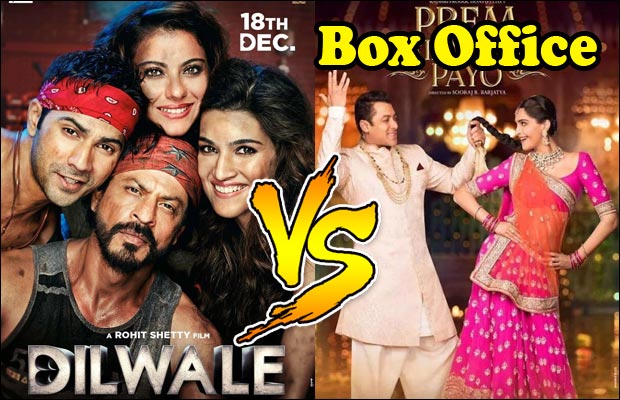 Bollywood films ‘Dilwale’ starring Shah Rukh Khan and ‘Prem Ratan Dhan Payo’ starring Salman Khan, both had great collections at the box office. Both the films managed to create lot of buzz before its release due to the star power, and on the basis of same, it is clear that Salman‘s movie did much better than SRK starrer ‘Dilwale’.

However the comparison wouldn’t exactly be fair as ‘Dilwale’ is sharing screens with ‘Bajirao Mastani’, whereas PRDP had all the screens available country wide that too for a period of four day weekend. Out of the advance bookings, PRDP had 65% of it for the first day which was the holiday of Diwali.

For SRK starrer ‘Dilwale’ the advance booking has been 50% for Friday and the rest for the remaining weekend. Ratio wise ‘Dilwale’ has got 50% collection of ‘Prem Ratan Dhan Payo’, but only has 30% of the screenings that the previous film got. Hence the numbers are pretty good. Whatever less screenings the film has is due to its clash with ‘Bajirao Mastani’