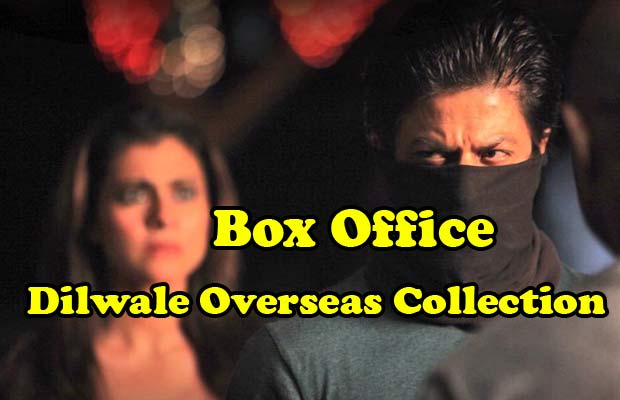 [tps_footer]Bollywood film ‘Dilwale’ starring Shah Rukh Khan is doing phenomenally well at the overseas box office just after two weeks. The film has set a record by crossing $20 million mark in just two weeks which was previously done by only 3 films ‘Dhoom 3′, ‘PK’ and ‘Bajrangi Bhaijaan’. All over the world ‘Dilwale’ is doing great but in Gulf the film has become second highest grossing Bollywood film of all time and in Malaysia, ‘Dilwale’ has become the top most Bollywood film with highest grossing collection ever. In India the film has shown drop in its performance but has made up well enough for it in the global collections.

‘Dilwale’ has collected total of $20.5 million mainly from countries like UK, US /Canada, Gulf and Australia where the film collected $15 million approximately. In Pakistan also the film smashed all records along with Malaysian market where the Shah Rukh Khan factor worked wonders. The film performed well due to the New Year factor as well. By the end of its third weekend business the film is looking at an extra collection of $2.5 million which totals to $23 million approx in its lifetime business.

In India however the film has lost grip as the collections have dropped drastically due to competition from ‘Bajirao Mastani’. After 15 days at the box office, the total business of ‘Bajirao Mastani’ has better collection than ‘Dilwale’ in Indian box office. Ranveer Singh film’s total is Rs. 145.86 crores net approx (Rs. 14.5 billion) and Shah Rukh Khan film Dilwale’s total is Rs. 130.12 crores net approx (Rs. 13 billion). Which is quite shocking for a Shah Rukh Khan film, however worldwide and in overseas collections ‘Dilwale’ has a strong hold.