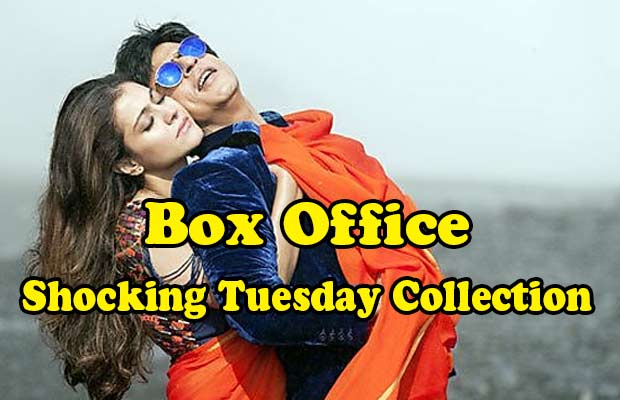 [tps_footer]Bollywood film ‘Dilwale’ starring Shah Rukh Khan has dropped a little more on Tuesday than its Monday business at the box office. The film had been showing the best performance over the weekend compared to its competition but is now gradually experiencing drop. After a huge shocking drop on Monday of about 55%, ‘Dilwale’ has dropped further 13% on Tuesday. The film collected Rs. 8.25 crores net approx (Rs. 82.5 million) on Tuesday which is not a number that is up to the mark of such a large scale movie. The same might also be due to the on going protests against the movie leading to shows being cancelled.

The first week business of ‘Dilwale’ is expected to be around 95 crores net approx which is also a figure that seems reasonable given the fall on Monday and Tuesday. Since ‘Dilwale’ is sharing the business with ‘Bajirao Mastani’, it has to be very steady over the weekdays to cover up for the lost business over the weekend. With such a huge drop it is hard to say if any miraculous numbers can be expected. The business was obviously not as expected during the weekend due to the clash and the same ground has to be covered by the films over the weekdays. With such a steady dip in the numbers each day it is hard to say how the second weekend performance of Shah Rukh Khan’s ‘Dilwale’ will be.