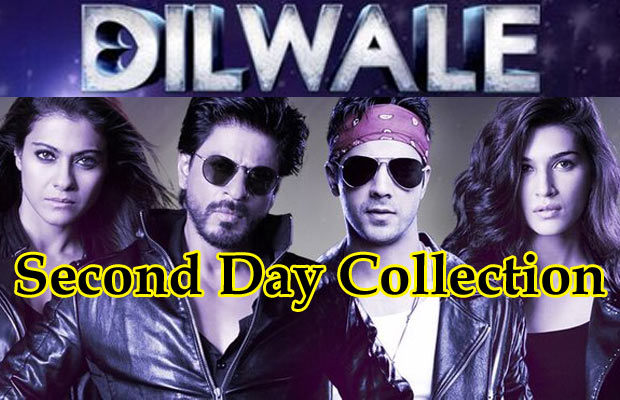 Bollywood film ‘Dilwale’ starring Shah Rukh Khan and Kajol in lead role has finished its second day run at the box office. On it’s first day, the film had collected Rs. 21.55 crores net approx (Rs. 215 million), which is a very good number despite the clash with ‘Bajirao Mastani’.

The second day number is still good, but the performance is not good all over, as it should be for a Shah Rukh Khan film. Some centres remained closed due to protests especially in CP Berar circuit.

The film is not getting big numbers all over as there is no holiday advantage. The film is being held back in crucial areas like Mumbai, North and Central India. Mumbai is understandable as Bajirao Mastani is giving it good competition, but North and Central will have to go up a level if it is to have a chance to get a big lifetime number. The great opening rates managed to give a boost to the first day collections.

Dilwale had an occupancy of 65% approximately which is very strong and the film comparatively did great in all the regions except some regions in Mumbai and Pune. The film also had good advance collections spanning throughout the weekend. The advance collection of Rs. 11 crores has been 50% for Friday and the rest for the remaining weekend. The same has also become an adding factor for the film’s first day collection.

‘Dilwale’ has an upper hand here with more star power as the film stars Shah Rukh Khan, Kajol, Varun Dhawan and Kriti Sanon. Director Rohit Shetty also has comparatively more credibility for giving entertaining films that audiences usually prefer over historic ones like ‘Bajirao Mastani’. After the great opening, we look forward to seeing the first weekend collections of the two films.