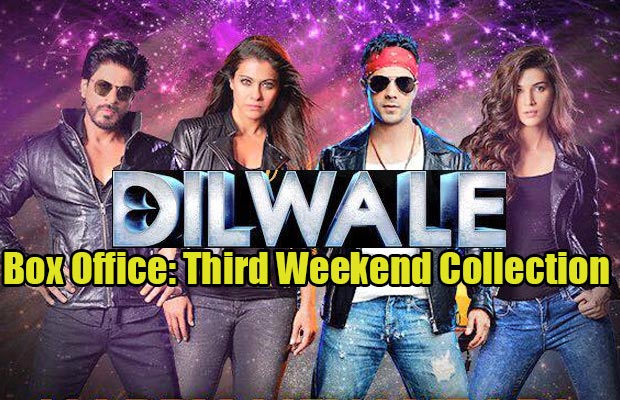 [tps_footer]Bollywood film ‘Dilwale’ starring Shah Rukh Khan is nearing its end and the third weekend collections at the box office are here. The film did exceptionally well in its first weekend given the Shah Rukh Khan factor, and also did wonders in the overseas market. In India however the second as well as third weekend saw considerable drop in collections due to tough competition from Ranveer Singh’s ‘Bajirao Mastani’. ‘Dilwale’ managed to collect a decent amount on third weekend, however, the drop is as high as 60%.

‘Dilwale’ collected Rs. 8.25 crores net approx (Rs. 82.5 million) in its third weekend experiencing a huge drop. In the coming week as well, the film will only experience further drop as this weekend its run at the box office will come to an end. ‘Dilwale’ and ‘Bajirao Mastani’ had been enjoying the market from December 18, 2015 and will continue to do so till the next film releases on January 8, 2016 that is this weekend. In this three weekends, ‘Dilwale’ has seen huge drop in its collections every weekend but has still managed to collect more than 100 crores easily.

In overseas, ‘Dilwale’ has collected total of $20.5 million mainly from countries like UK, US /Canada, Gulf and Australia where the film collected $15 million approximately. In Pakistan also the film smashed all records along with Malaysian market where the Shah Rukh Khan factor worked wonders. The film performed well due to the New Year factor as well. By the end of its third weekend business the film is looking at an extra collection of $2.5 million which totals to $23 million approx in its lifetime business.[/tps_footer]