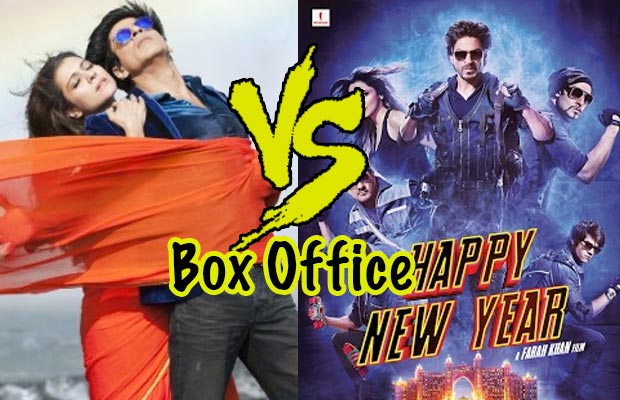 [tps_footer]Bollywood film Dilwale VS Happy New Year both starring Shah Rukh Khan released around same time last year, in which the latter is leading. This is majorly due to the business that has split between ‘Dilwale’ and Bajirao Mastani who are competing cut throat with each other. Happy New Year had broken all sorts of records when it released and in Dilwale VS Happy New Year also, the latter is leading with much higher figures. Comparing the first weekend collections and first day business of both films, ‘Dilwale’ is behind due to the clash with Bajirao Mastani.

Apart from the clash with Bajirao Mastani, ‘Dilwale’ is also facing lot of protests against the film due to some political issues related to Shah Rukh Khan. The film is being boycotted in some parts of India, which is in turn affecting the film that is already facing so much heated competition at the box office. All these conditions did not prevail during Happy New Year which released on its own with the entire market up for grabs during festive year end.

Globally also in Dilwale VS Happy New Year, HNY did much better than the former. However ‘Dilwale’ did emerge as this year’s biggest overseas film beating the records set by Salman Khan. Globally the film is heading towards the 200 crore mark right now but it is hard to say if Dilwale VS Happy New Year shows any other result than the failure of this year’s release.[/tps_footer]