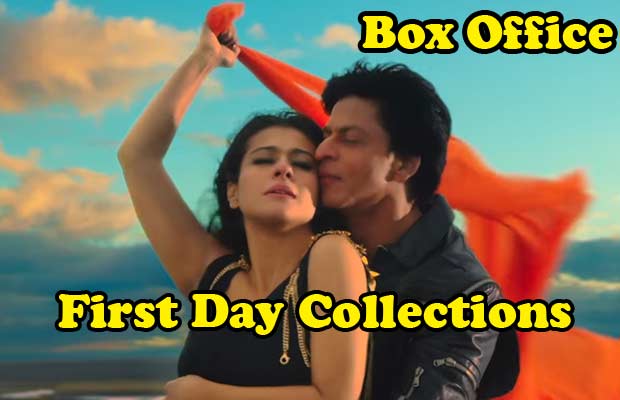 [tps_footer]Bollywood film ‘Dilwale’ starring Shah Rukh Khan and Kajol in lead role has finished its first day run at the box office impressively. The film was expected to collect Rs. 20-30 crores net approx and it has done the same by becoming the front runner in most of the regions in India. ‘Dilwale’ has got a collection of Rs. 21.55 crores net approx (Rs. 215 million) on its first day which is a very good number despite the clash with ‘Bajirao Mastani’. As predicted earlier the film has performed better in Northern regions as well as some parts of South where a film like ‘Bajirao Mastani‘ cannot sustain.

‘Dilwale’ has got massive response from South India as well as East India with areas like Andhra, Mysore, Tamil Nadu, Kerala, West Bengal, Bihar, Assam and Orissa showing lot of activeness due to the Shah Rukh Khan star factor. Especially the Delhi and UP regions has performed the best for ‘Dilwale’ as its competition had no hold on these sectors despite having the best screens. The great opening rates managed to give a boost to the first day collections.

‘Dilwale’ had an occupancy of 65% approximately which is very strong and the film comparatively did great in all the regions except some regions in Mumbai and Pune. ‘Dilwale’ also had good advance collections spanning throughout the weekend. The advance collection of Rs. 11 crores has been 50% for Friday and the rest for the remaining weekend. The same has also become an adding factor for the film’s first day collection.

‘Dilwale’ naturally has an upper hand here with more star power as the film stars Shah Rukh Khan, Kajol, Varun Dhawan and Kriti Sanon. Director Rohit Shetty also has comparatively more credibility for giving entertaining films that audiences usually prefer over historic ones like ‘Bajirao Mastani’. After the great opening, we look forward to seeing the first weekend collections of the two films.[/tps_footer]