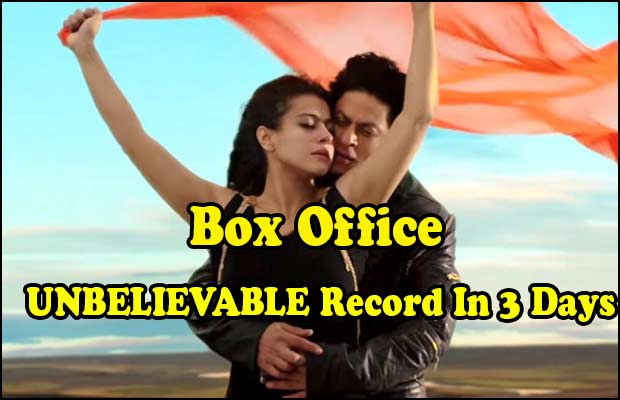 [tps_footer]Bollywood film ‘Dilwale’ starring Shah Rukh Khan has crossed the 100 crore mark in 3 days in its worldwide collections. The film has got itself a position in the best opening weekend worldwide list of 2015 by gaining the third position. ‘Dilwale’ is sharing its business with ‘Bajirao Mastani’ which is also performing well. If the competition did not exist the numbers would have been much higher for the film. ‘Dilwale’ has collected Rs. 145-150 crores net approx worldwide in its first week itself achieving the milestone of crossing 100 crores in its initial three days itself.

Not just that, Shah Rukh Khan‘s ‘Dilwale’ has become the highest opening film of 2015 in Overseas business by overtaking the previous record set by Salman Khan starrer ‘Bajrangi Bhaijaan’. The overseas collections of the film have contributed a lot to its overall collections helping it cross the 100 crore mark so quickly. Not only that, ‘Dilwale’ has also emerged as the biggest Bollywood opening film ever in the Gulf territory which is a huge market for Indian cinema. The Gulf performance of the film has also overtaken Hollywood giant release ‘Star Wars: The Force Awakens’.

‘Dilwale’ is steady shattering records and it seems the 200 crore mark is also not that far for the film considering the worldwide response the film is receiving. ‘Bajirao Mastani’ has managed to get Rs. 85-90 crores net approx in its opening weekend worldwide which is also not bad. If the competition did not exist, ‘Dilwale’ could have made much more than what it already did. Both the films combined ‘Dilwale’ and ‘Bajirao Mastani’ have raked in business of more than 200 crores in the opening weekend itself which is the biggest number for Bollywood films in the history of clashes.

Well till now both the films are performing well by sharing the business. However Shah Rukh Khan is leading with his record shattering movie ‘Dilwale’.[/tps_footer]