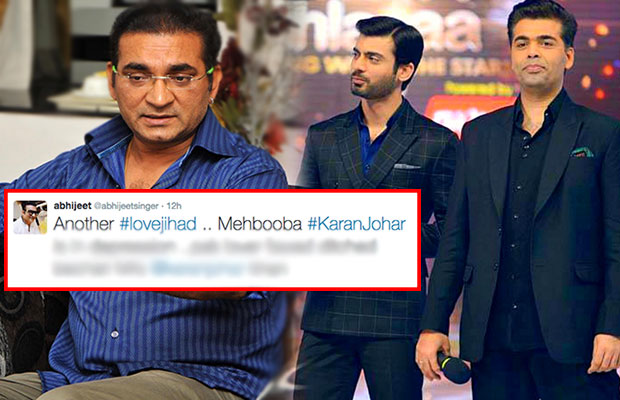 Abhijeet Bhattacharya leaves no opportunity to stay in the news for his offensive and degrading tweets. This time, he again targetted Karan Johar and Fawad Khan in his tweets. Well, this time, he crossed a line and passed a s*xist comment on both the stars.

Karan has been facing flak as his film Ae Dil Hai Mushkil stars Pakistani actor Fawad. He even stated that banning Pakistani actors won’t be a solution to end this war. Well, that did not go well with many people as well as political parties. KJo has been warned to cut off Fawad’s role otherwise, his film will face a ban. Now, another terrorist attack at Baramulla has created more tension between the two nations.

Recently, Karan cleared the air that Fawad won’t be the first guest in his celebrity talk show, Koffee With Karan Season 5. Well, Abhijeet mocked the entire issue and made fun of the two. Let’s see how Karan reacts to this statement.

Not only Karan, celebrities like Salman Khan and Mahesh Bhatt are also supporting the Pakistani artistes.