India’s most loved comedian Kapil Sharma has finally introduced his girlfriend to the world in the most adorable way.

The most loved comedian Kapil Sharma has often been seen flirting with Bollywood actresses who arrive on his show as guests for the promotions of their films. The comedian turned actor is equally famous among the female fan followers. Also, many times on the social media, Kapil Sharma’s female fan followers have sent the charming comedian turned actor marriage proposals and he has always reacted to them humorously.

Kapil Sharma has won many hearts with his amazing and charming personality, but did we ever wonder who might have steal Kapil’s heart? Well, finally Kapil has introduced the lady that has won his heart.

Earlier today, Kapil Sharma took to twitter and shared an adorable photo of him with his girlfriend. He captioned the pictures as, “Will not say she is my better half .. she completes me .. love u ginni .. please welcome her .. I love her so much:)” 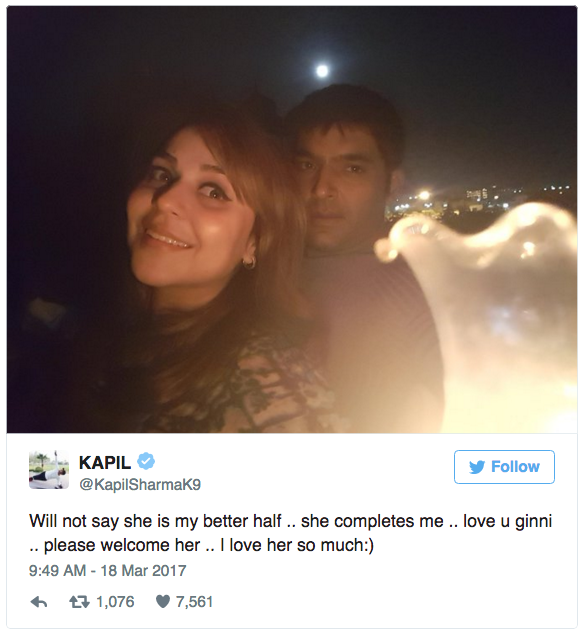 Before making the big announcement, Kapil teased his fans with a tweet that read, “Hi..want to share something very beautiful thing with u guys …wait for 30 mins ..”