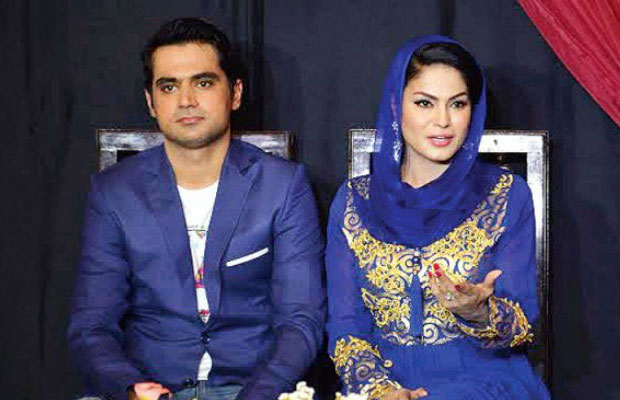 Former Bigg Boss contestant and Pakistani actress Veena Malik recently ended her three years of marriage with Dubai-based Asad Bashir Khan Khattak. The two have officially parted ways after a family court in Lahore granted them divorce. Veena Malika and Asad Khattak got married in December 2013 in Dubai and were reportedly living separately since past few months. After her husband turned abusive, Veena Malika with her two kids went back to her mother’s place.

Now, in a recent interview with Indian media, Veena Malik has opened up that what went wrong in their marriage and how she had to face the scary side of her husband.

As quoted by DNA, Veena Malik relives the nightmare that was her marriage. She said, “It actually started from the day we got married. Usske pehle sab kuch suhana tha (all was rose-tinted before marriage). Ours was an arranged marriage. My father selected Assad, and I was more than happy to go by my father’s decision. Assad was successful , handsome, loving and caring…Everything changed once we got married. I was looking at a different man, and a completely different life from what I had imagined for myself after marriage. It rapidly became so bad that I began to wonder why he married me in the first place! Was it some kind of a revenge…and if so, for what?”

Veena Malik also revealed that a day after the marriage she was asked by Asad to stay at home only. She revealed, “Assad told me I couldn’t go out of the house on my own. He told me I had to do all the housework including the cooking and cleaning. It was always my dream to settle down one day and run my own house. So I willingly accepted his demands.”

She further revealed that how things got worse after Asad asked her to abort their first child. Veena added saying, He would shout at me and abuse me for no reason at all. I thought things would be better between us once we had a child. So I was very happy when I was pregnant with my son Abram. To my horror and shock, my husband said he didn’t want the child. Since I refused to abort, he had no choice. And we had our son Abram. Soon my daughter Amal was also born. But it changed nothing in his attitude. He got worse. I tried to explain the situation to my father. But like all anxious fathers, he reassured me that things will get better. They didn’t.”

That’s not all, Veena Malik also faced physical violence. “No man would understand what a woman feels when she is assaulted. I bore with it hoping he would improve. It isn’t as if he’d get drunk to be abusive. He doesn’t drink. That’s the scary part. He was naturally abusive. And as my son grew older he became a horrified witness to his mother’s abuse. I had to leave for the sake of my children and for my own sake,” revealed former Bigg Boss contestant Veena Malik.

Recently, on a Pakistani television show, Veena’s husband Asad pleaded her for reconciliation and forgiveness. Maulana told Malik. “He is saying it before so many people, he should be given another chance.”

Veena then asked to Maulana to obtain a written guarantee from her husband to which he agreed. She said that she was ready to give him another chance, but that it all had to be court approved.

Meanwhile, Veena Malik has started working again and has bagged a Pakistani television series. She is also planning to come to Indian soon.