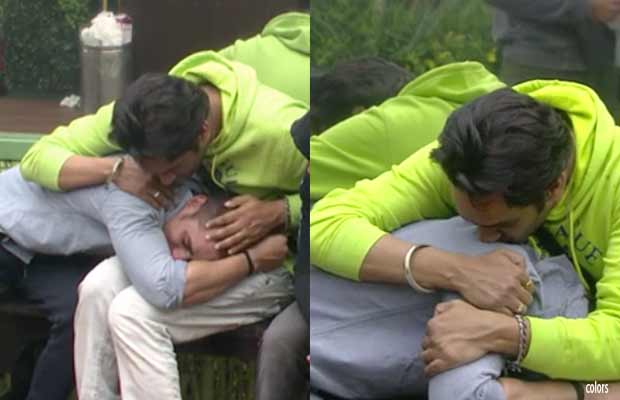 In tonight’s episode of Bigg Boss 11, contestants will be seen teary-eyed as they will meet their family. Shilpa Shinde‘s mother, Puneesh Sharma‘s father and Priyank Sharma‘s ex-girlfriend Divya Agarwal will enter the house.

In a video that surfaced on the internet, Priyank and Divya can be seen in tears, with the former maintaining his statue position. Divya, who is angry with Priyank entered the house with mixed emotions. As she entered the house, she went to Priyank and questioned him what made him hurt her. Read Here To Know More: Bigg Boss 11: Divya Agarwal Makes SHOCKING Revelations On Her Break Up With Priyank Sharma!

She also told Priyank that she has broken up with him as he never mentioned her as his girlfriend on the show. Priyank breaks down into tears when he realizes that things are worst for him in the outside world.

He further says that mistakes happen but we need to correct them. He explains Priyank that even he had made so many mistakes some three years back. Vikas even says, ‘I Love You’ to his close friend Priyank Sharma.

Priyank replies saying that how things have ended for him. To which Vikas replies that they will make things better again. Vikas Gupta tells Priyank that keep faith in him to make things zero to 100 again. He keeps him cheering up that its okay to make mistakes in life.

Vikas also shares his worst phase of life that he had some three years ago. He tells that he faced something very bad some three years and felt very low in life. However, he played well and corrected things to make it better. He explains Priyank Sharma the importance of the life. He asks him to stop thinking about what others think about him.

Vikas further says to Priyank that he is very strong in the game and that he should not let people come and speak anything about him.

Further adding, “Keep people who love you in priorities, rest people and their love will keep changing. Don’t react much. Fans will come and go..nothing is important than family.”

He asks him to stop thinking about Instagram fans and #Divyank fans that Divya Agarwal spoke about when she entered the house. Priyank then replies saying why did Divya enter the house.

Here is the video, as posted by a fan club of Priyank Sharma-