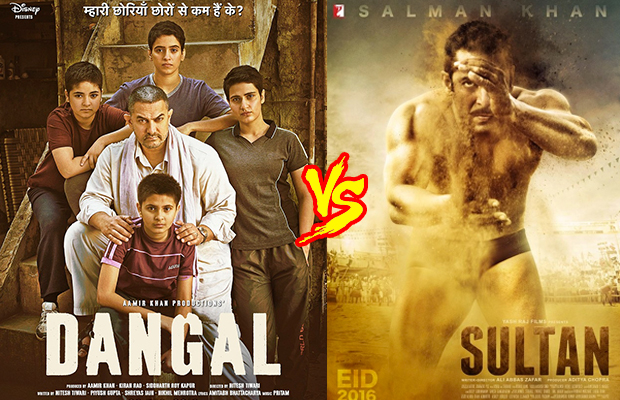 Aamir Khan starrer Dangal is currently making the right noise all over and is one of the much-awaited films of the year. Also, this film is the biggest last film of the year, which has created immense anticipation amongst the audience. The movie has been receiving a lot of appraisals right from its trailer launch. In fact, the songs of the film have also connected better with the audience and have received a positive response.

As we all know, Dangal is based on the life of ace wrestler Mahavir Singh Phogat and the journey of his daughters Geeta and Babita Phogat. The film is mainly based on wrestling and on how a father leaves no stone unturned to craft his daughters to become wrestlers at a huge level. Being a film on wrestling, the comparison with Salman Khan’s Sultan is quite obvious.

Salman Khan’s Sultan, which released this year on Eid, has left an impact on the audience. Though the story of both the films is quite different, there are possibilities that the audience might compare the film with Sultan after watching it as wrestling being the common factor.

Well, keeping the comparison aside, it remains to see if Dangal can beat Sultan’s opening day collection. CLICK NEXT TO KNOW!