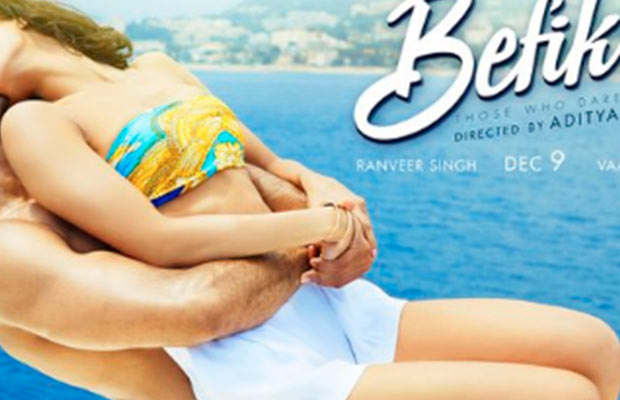 [tps_footer]Ranveer Singh and Vaani Kapoor’s Befikre is making us all excited. Today, Ranveer revealed another hot poster of the film. Like the film’s previous posters, in this one too the duos are passionately kissing each other. They look extremely hot and adorable together.

Looks like Ranveer cannot stop kissing Vaani at all. Both the good-looking actors look sizzling kissing beside a beach on a French beach. The Gunday actor took to his Twitter to share the alluring poster of his upcoming film. He captioned the tweet as, ‘French Waters, Desi Kisses!’ 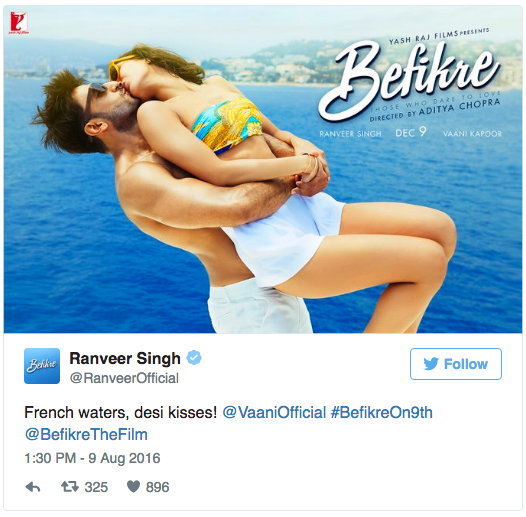 Well, well, looks like even in some other country, the pair will show us some desi romance in the film. The poster looks quite stimulating and spunky. Also, reportedly Ranveer will kiss the Shudh Desi Romance actress 24 times in the film. Thus, we might get to see more such sensual posters and scenes ahead. Also, the previous posters unveiled also showed Ranveer-Vaani fervently kissing each other.

Aditya Chopra has directed and produced Befikre. Al large part of the film is shot in Paris. This will be Aditya’s comeback as a director as his last film was Rab Ne Bana De Jodi. So, we can expect a lot of romance and intense love story in the film. Vishal-Shekhar will compose the music of Befikre, whereas Javed Akhtar will pen down the lyrics. The film will release on December 9 this year.[/tps_footer]