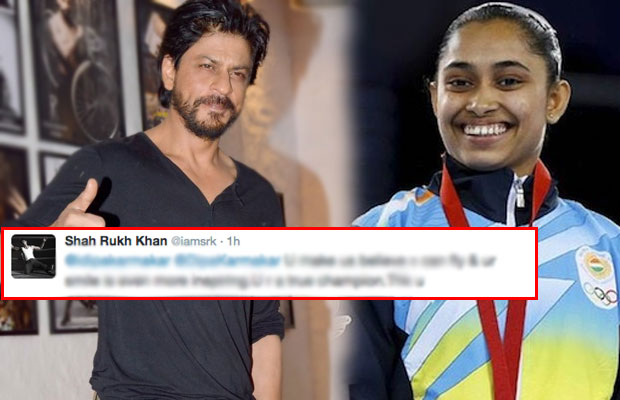 Shah Rukh Khan in his tweet thanked first Indian woman gymnast Dipa Karmakar for her impressive performance at Rio Olympics. She scored an average of 15.066 points. It was mere 0.15 less than the bronze winner Giulia Steingruber, who has scored 15.216 from Switzerland. Well, the entire nation congratulated her for her efforts and hard work. They thanked her for giving India a new recognition at the Olympics.

SRK in his tweet said, ‘@idipakarmakar @DipaKarmakar U make us believe v can fly & ur smile is, even more, inspiring.U r a true champion.Thk u’.

Well, we completely agree with King Khan. Dipa made us believe that we can achieve what we think we cannot. Also, when she lost, she didn’t lose hope in fact with a smile said she will surely win the 2020 Olympics game. Well, the23-year-old girl truly shows a true sportsman spirit and embraces everything with a smile.

SRK will soon start shooting for Imtiaz Ali’s film opposite Anushka Sharma. The film is tentatively titled as The Ring. Anushka will play a role of a Gujarati girl whereas SRK will be seen as a Punjabi guide in the film. Apparently, the film is going to be an intense love story. SRK’s upcoming film starring Dear Zindagi will hit the screens on November 25. On the other hand, his prolonged film Raees will release in January 2017.