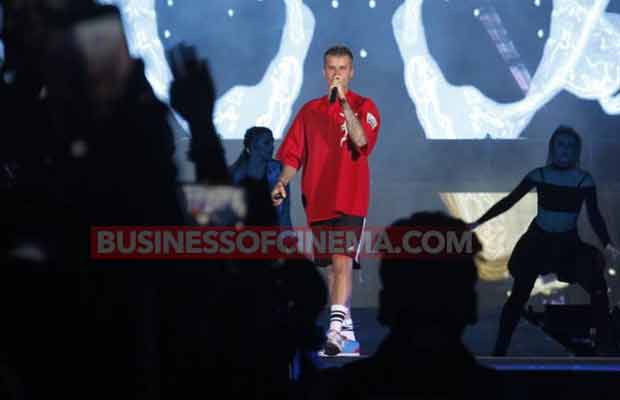 What made Justin Bieber feels sorry to his fans at the concert last night in Navi Mumbai.

It was one of the nights Justin Bieber and his Bielebers would never forget. Around 45 thousand fans gathered together last night at DY Patil Stadium in Navi Mumbai to catch Justin Bieber performing live. Grammy Award winning Canadian singer performed to a stadium full of his fans, who were excited, emotional and euphoric as the “Baby” singer took the stage.

“What a beautiful night for me as I am here in this beautiful country for the first time. And you people are fav (favourite),” Bieber said as he started the show at the D.Y. Patil Stadium last night.

The Grammy Award winner also played the guitar to everyone’s surprise but a blunder made him apologize his fans. When his guitar went out of tunes, he apologised to his fans saying that because of the humid weather his guitar strings went out of tune.

Watch him playing guitar at the concert last night:

(8) Another video of Justin Bieber onstage performing at the #PurposeTour in Mumbai, India. (May 10) pic.twitter.com/NPgZkV7126

The crowd predominantly saw youngsters, but it was interesting to note how people had come from various parts of the country and in groups to witness the concert, one of the biggest in India in recent times.