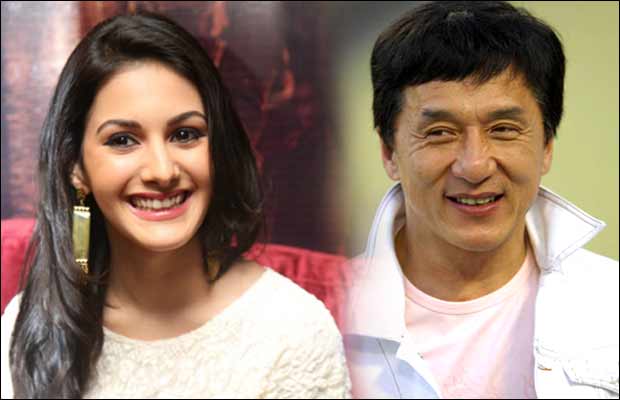 [tps_footer]Bollywood actress Amyra Dastur has landed herself a role in Jackie Chan‘s much awaited movie ‘Kung Fu Yoga‘. Earlier the same role was supposed to be done by Ileana D’Cruz but now reportedly the actress has opted out of the film, and the role has landed into Amyra’s kitty. As reported by Bollywood Hungama, Amyra Dastur was the perfect fit for the role for which many actresses were contending. This is her first Hollywood venture and certainly she is lucky to be working with Jackie Chan.

Amyra Dastur is only just starting out trying her luck in different film industries of India. After making her debut in the film ‘Issaq’ with actor Prateik Babbar, Amyra was most recently seen in the Bollywood film ‘Mr. X’ starring actor Emraan Hashmi. She has also started becoming a well known face down in the Southern industry with recent films like ‘Akhil’ and Dhanush starrer ‘Anegan’. And now it seems the pretty lady is taking a huge step by venturing into Hollywood with ‘Kung Fu Yoga’.

Other than Amyra, the other Indian face in the film would be of actor Sonu Sood who has already started shooting with Jackie Chan. Looking at Sood’s history of action filled roles in almost each of his film, we think he’s a good choice for this role! Amyra Dastur will be joining the two in China for the next shooting schedule of the film. Reportedly she has a full-fledged role in the film and not just a cameo.

Earlier it was also announced that Jackie Chan’s upcoming film ‘Kung Fu Yoga’ will be shot in India under the India-China coproduction agreement. For which India’s Viacom 18 Motion Pictures and China’s Taihe Entertainment Corporation and Shinework Media have come together. The last movie done by Jackie Chan with an Indian actor was ‘The Myth’ starring Mallika Sherawat. We cannot wait to see Sonu Sood, Amyra Dastur and Jackie Chan together in ‘Kung Fu Yoga’![/tps_footer]