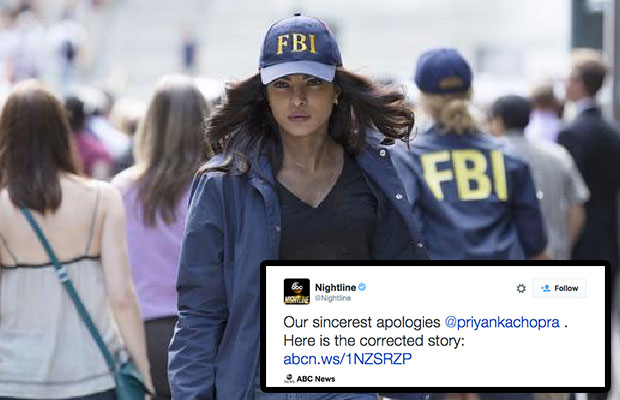 The versatile actress of Bollywood Priyanka Chopra is grabbing all the attention for her new released show, ‘Quantico.’ The actress has become a huge star internationally, where from television to hoardings, billboards and radios, Priyanka Chopra is seen everywhere.

But while playing the video, ABC made a blunder by confusing ‘Quantico’ star Priyanka Chopra with ex Miss World Yukta Mookhey. But nevertheless, the ABC network realized and corrected the footage instantly. They also took to their twitter handle to apologize to Priyanka Chopra.

They tweeted, “Our sincerest apologies @priyankachopra . Here is the corrected story: http://abcn.ws/1NZSRZP “

Priyanka Chopra who was all fine with the blunder was humble enough to reply them back by saying, “Thank you for the correction @Nightline .. #Quantico” 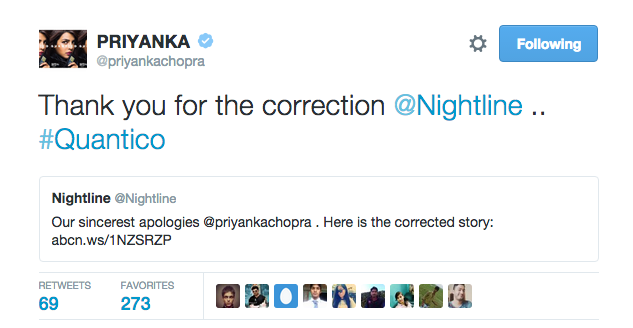 Earlier, when Priyanka Chopra got her eye on the mishap, the actress didn’t react much and said, “Lol!”

Well, we say if you don’t know who Priyanka Chopra is in US, then you are definately living under a rock!

Priyanka Chopra has taken America by storm, as she has made her debut with her first network show ‘Quantico’ whose first episode so far has gotten rave reviews. Each and everyone including Bollywood celebrities wished and praised Priyanka Chopra for the show which went on air on September 27.