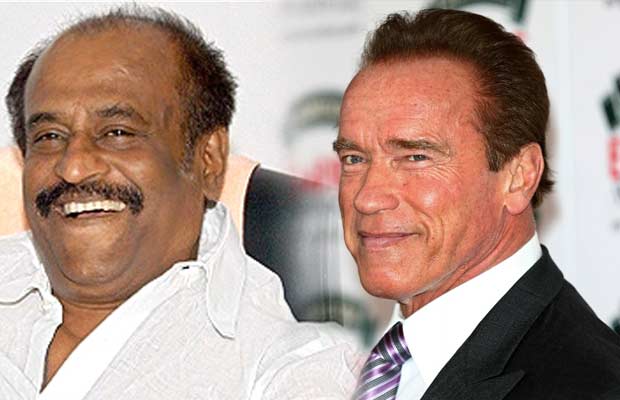 [tps_footer]Hollywood star Arnold Schwarzenegger might have opted out of Rajinikanth starrer ‘Enthiran 2′ due to several reasons according to sources. The actor was offered the role of the baddie in the film and talks had already confirmed that he has nodded yes. But now with the recent turn of events it seems like many things did not fall into place and finally a Bollywood actor is being roped in instead of Arnold Schwarzenegger. Well one of the main reasons touted is the actor’s demand for a very high remuneration.

As we had revealed earlier Arnold Schwarzenegger was asking for a whooping remuneration of Rs. 120 crores approx which made ‘Enthiran 2’ a costly affair with a budget of Rs. 250 crores. This was one of the reasons why it was decided that an Indian actor would be replacing the Hollywood star as the project was getting delayed. Although the exact reason was not revealed, the source hinted towards the high remuneration being the biggest hurdle in roping in Arnold Schwarzenegger.

Earlier it was stated that apparently the ‘Terminator’ actor had attended an exhibition put up during Shankar’s previous film ‘I’ starring Vikram, and had expressed his willingness to do an Indian film soon. Seeing the opportunity Shankar narrated the story of ‘Robot 2’ to Arnold who absolutely loved the storyline and enthusiastically nodded yes. But recently it was revealed that Bollywood star Neil Nitin Mukesh has been approached by director Shankar who loved his work in Vijay’s ‘Kaththi’.

The role is apparently a very strong and vital one which needs lot of power in the character. Neil has read his part and has apparently nodded yes for the role since the actor liked the part he will be playing in the film. After impressing everyone with his performance as a bad guy in Vijay’s ‘Kaththi’ and the recent film ‘Prem Ratan Dhan Payo’ starring Salman Khan, Neil Nitin Mukesh is turning into the official choice for tough roles like these. So does this mean Neil Nitin mukesh has officially replaced Arnold Schwarzenegger in ‘Enthiran 2′? Well we wait to hear it from the filmmakers themselves![/tps_footer]