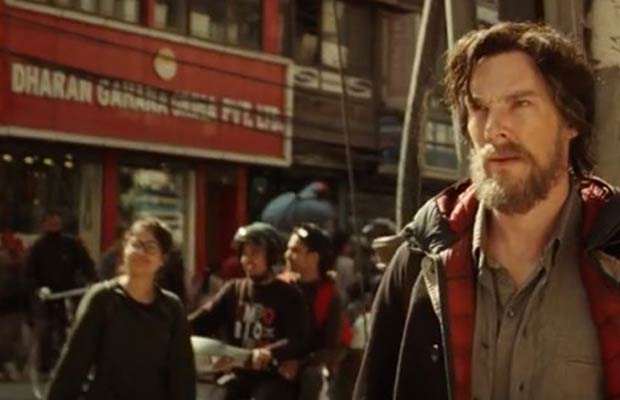 [tps_footer]It is the season of the back-to-back trailers of some of the highly anticipated movies for the coming years. One such trailer that fans have been for was Marvel’s ‘Doctor Strange’. Marvel finally released the very first trailer of Benedict Cumberbatch‘s ‘Doctor Strange’ and it looks absolutely amazing. Welcome to the magical world of Marvel!

The very trailer was on released by Benedict himself on Jimmy Kimmel‘s talk show, ‘Jimmy Kimmel Live’ through a comedy sketch. Since the announcement of the film and some leaked pictures from the sets of Benedict shooting for the film, fans have been waiting for one teaser. Instead, we got more a than expected in the trailer. For those who don’t know the major plot of the story, here is a little synopsis for it.

“Doctor Strange follows the story of neurosurgeon Doctor Stephen Strange who, after a horrific car accident, discovers the hidden world of magic and alternate dimensions.”

The opening scene in the first trailer shows Dr. Strange sitting stunned in his twisted heap of his car accident which is very similar to the comics. In comics, his hands were too damaged for any kind of surgery. Highly dissatisfied by the prognosis, Doctor Strange decides to take a different path to find a cure which leads him to an ancient one. The Ancient one played by Tilda Swinton, is Strange‘s teacher and mentor. Ancient one is one of the most powerful magical beings in Marvel’s cinematic universe. To show Strange the extent of her powers, the Ancient One literally separates Strange‘s soul from his body that leaves him in astral projection and in the state of shock.

Also, did you notice Strange falling from one New York to another hinting different universe dimensions! That shot looked incredible.

We get a glimpse of Rachel McAdams‘ character as she rushed Strange for the surgery in the opening scene. We also see Mads Mikkelsen‘s character, who happens to the big bad villain. Also, he may or may not have the Infinity stone! Last but definitely not the least, the closing scene of the trailer shows Benedict in his superhero suit.

In all, ‘Doctor Strange’ looked pretty intriguing and has raised the expectations of the all the fans who have enjoyed Marvel movies over the years!  Two posters have been released as well that look incredible and hints more magic.

Directed by Scott Derrickson, the film stars Benedict Cumberbatch as Dr. Stephen Strange, Tilda Swinton as The Ancient One, Chiwetel Ejiofor as Baron Mordo, Rachel McAdams as Christine Palmer, a.k.a. Night Nurse, Benedict Wong as Wong and Mads Mikkelsen will play an unspecified villain role. The film is set to the hit the theaters on November 4, 2016.