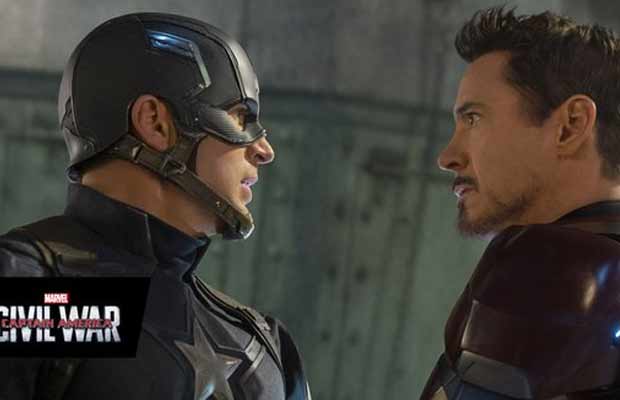 [tps_footer]‘Captain America: Civil War’ is expected to be Marvel’s biggest movie of this year after ‘Deadpool’ ofcourse. The highly anticipated film kickstarts the phase 3 of Marvel films. The first trailer released last year in November on Jimmy Kimmel‘s talk show, ‘Jimmy Kimmel Live’, in the presence of the the film’s lead actors Chris Evans and Robert Downey Jr.

The film presents a dark phase in Captain’s life that leads to problems with Iron Man. Marvel Studios have been releasing the teaser posters and sneak peeks, recently. Yesterday, they unveiled two new sneak peeks and ask the fans of the franchise to pick their sides.  ‘United we stand. Divided we fall’ chants a chorus of voices over two new teasers that highlights the two teams in the film. There is Team Cap ( Captain America) involving Falcon, Scarlet Witch, Ant Man, Hawkeye and Bucky Barnes. Team Iron Man involves Black Widow, Black Panther and War Machine. The brief sneak peek is just to excite the fans for world premiere of a new trailer that will be releasing today. The avengers have parted ways and have decided which team they would be choosing.

Directed by the Russo brothers, the trailer and sneak peeks for the third installment of ‘Captain America’ is raising the expectations of the fans. Russo brothers had also directed ‘Captain America: The Winter Soldier’. The movie stars Scarlett Johansson as Black Widow, Sebastian Stan as Winter Soldier or Bucky Barnes, Anthony Mackie as Falcon and Jeremy Renner as Hawkeye. The movie is slated to release next year on May 6, 2016.

Here’s is Synopsis of the film:

“After another incident involving the Avengers results in collateral damage, political pressure mounts to install a system of accountability, headed by a governing body to oversee and direct the team. The new status quo fractures the Avengers, resulting in two camps, one led by Steve Rogers and his desire for the Avengers to remain free to defend humanity without government interference, and the other following Tony Stark’s surprising decision to support government oversight and accountability.”

So, which team are you on – Team Captain or Team Iron Man?

Check out the videos: