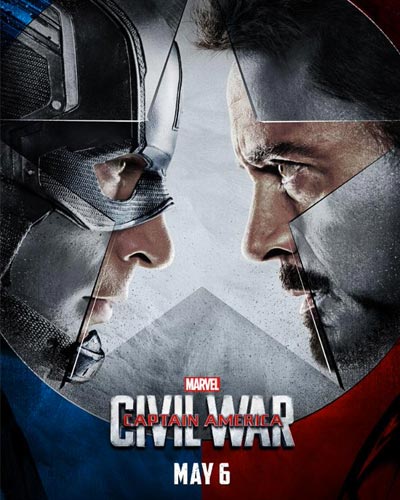 [tps_footer]The trailer of the highly anticipated Marvel movie, ‘Captain America: Civil War’ was released on Tuesday night on the celebrity talk show, ‘Jimmy Kimmel Live’. The lead actors of the movie, Chris Evans and Robert Downey Jr, were present for the release of the first trailer of the third installment of ‘Captain America’. The trailer kicks off the phase 3 of the Marvel movies. From the looks of it, the movie looks pretty dark and exciting at the same time. In this trailer, we see Iron Man, Black Widow, War Machine, Scarlet Witch, Hawkeye, Winter Soldier, Vision, Falcon, Ant-man, and for the first time, Black Panther.

The trailer starts Captain America aka Steve Rogers finding Bucky Barnes aka Winter Soldier. It seems that people in the city believe Bucky was involved in some kind of terrorist attack. To this, Bucky says he does not do that anymore. People of the city want Bucky Barnes dead. The plotline of this installment is that people raise the question of whether the Avengers are heroes or the vigilantes. It’s unclear which side Black Widow takes, but Captain America and Iron Man are definitely on different sides. Tony Stark even says, “If we don’t accept limitations, we’re no different from the bad guys.” The world’s governments want more oversight but after the events of Winter Soldier, Captain America has been developing some trust issues against authority. At the same time, Iron Man has seen his creations wreak tremendous damage, and it makes sense that he wants there to be checks and balances. And the rest of the heroes seem to be lining up behind these two, much like the Civil War arc in the comics. Falcon seems to be on Captain America’s side, and so do Hawkeye and Scarlet Witch, while there’s a scene where Tony Stark (in his Iron Man suit) is cradling the fallen body of James Rhodes (in the War Machine suit).

Last scene in the trailer, Captain America and Winter Soldier fight Iron Man, They have him pinned down and are really getting the hits in, throwing Captain America’s shield between each other.

Directed by the Russo brothers, the trailer for the third installment of ‘Captain America’ has raised the expectations of the fans very high. Russo brothers had also directed ‘Captain America: The Winter Soldier’. The movie stars Scarlett Johansson as Black Widow, Sebastian Stan as Winter Soldier or Bucky Barnes, Anthony Mackie as Falcon and Jeremy Renner as Hawkeye. The movie is slated to release next year on May 6, 2016.