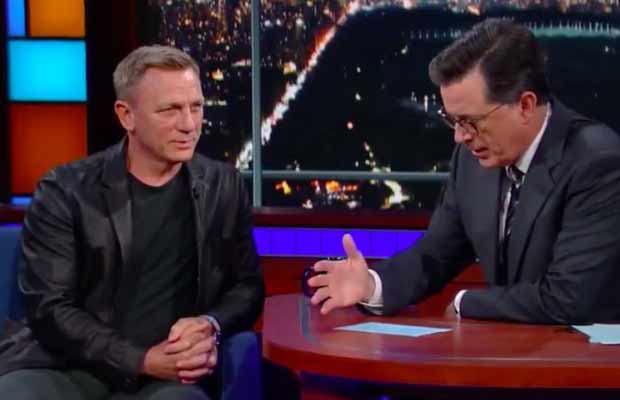 Daniel Craig revealed on the ‘Late Late Show With Stephen Colbert’ that he was very much in the James Bond series.

The ‘James Bond’ film franchise has been rumoured to have replaced the blue eyed hunk Daniel Craig from the action series. But the news was untrue!

The ‘Skyfall’ actor admitted that he is very excited to join the action thriller series. He said, “I have been quite cagey about it. I have been doing interviews all day and people have been asking me and I think I’ve been rather coy. But kind of felt like if I was going to speak the truth I should speak truth to you.”

The actor revealed that “It’s been a couple of months and we’ve been discussing it and trying to figure it out. “I always wanted to [come back]. I [just] needed a break.”

The host of the show Stephen Colbert went on to ask if the actor was really quitting the famous franchise. “We could use some good news here. Daniel Craig, will you return as James Bond?”

Daniel Craig’s only reply was a “Yes” and that was all it took to calm all the fans.

The actor did hint that it could be his last movie as the character James Bond. “I think this is it. I just want to go out on a high note and I can’t wait,” he said. The actor also told a US radio station Magic that he would love to do it but he was making some personal decisions as well.

Daniel Craig has played James Bond is 4 movies – Casino Royale, Quantum Of Solace, Skyfall and Spectre. The actor had stated earlier that he would rather “slit my wrists” than take on the role of James Bond again.

After this quite shocking statement, fans then began to pitch in different actor suited for the role. Names like Tom Hiddleston, Tom Hardy and Idris Elba kept popping up.

Daniel Craig explained his statement sheepishly saying, “Instead of saying something with style and grace, I said something really stupid.” He added that it was only two days after the filming of Spectre and he was tired of the franchise.

The actor took over the famous British spy character from actor Pierce Brosnan in ‘Casino Royale’ in 2006.

Fans were extremely happy over this news and shared their thoughts via social media.

I’m looking forward to the next James Bond movie with #DanielCraig.

At least one piece of good news today.

Thank f*cking GAWD! Daniel Craig is coming back as BOND!
Hurry the f*ck up!!! pic.twitter.com/tx8MqPhpnR

Everyone relax, Daniel Craig is returning for one last #JamesBond pic.twitter.com/vKLXXxscAO

The movie will most likely have a big shot director and even rumoured to have Christopher Nolan handling the film. The franchise’s producers Barbara Broccoli and Michael G. Wilson were sure that Daniel Craig would return according to his contractual 5 movies. It will be the sequel to the 2015 ‘Spectre’ and is set to release in 2019. ‘Spectre’ has earned almost $880 million worldwide. The movie will be released on November 8th, 2019 in U.S and earlier in U.K and international markets.

Daniel Craig will be seen next in Steven Soderbergh’s Logan Lucky releasing on August 18th this year.

TONIGHT: Daniel Craig makes an announcement that will leave you shaken, not stirred. #JamesBond #LSSC pic.twitter.com/gaSgVs3LkN