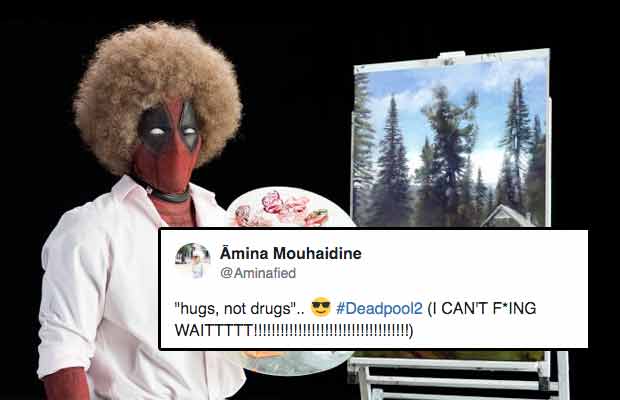 Deadpool 2 has been one of the most anticipated of movies in the Marvel Cinematic Universe and since the teaser trailer has released twitter cannot contain itself!

Deadpool 2’s teaser trailer pays more than just homage to the eccentric Marvel superhero— Deadpool. In ‘Gettin’ Wet on Wet with Deadpool 2’ Ryan Reynolds’ Deadpool can be seen in his late painter Bob Ross’ avatar. White button up shirt, blue jeans with a black belt, impressive perm, syrupy tone, paintbrush and paint laden palette, that’s Bob Ross to us alright! But mix that with Deadpool’s exaggerated and suggestive brush strokes. This is not all, we also see some gun action, jumping on cars, Negasonic Teenage Warhead, Deadpool’s blind landlady, deadpool in a coffin and of course some chimichangas.

Wow, two entire minutes of the same Bob Ross joke. That Deadpool 2 trailer sure is “hella epic”. I hope the next one has some more relevant one liners about things like Corgis, Rick Astley, and keyboard cat.

Perv and I love you for it ?:3 #Deadpool2 pic.twitter.com/jKXEKhDTA8

Deadpool dressed up as Bob Ross is the funniest shit I’ve seen this year hands down ? pic.twitter.com/byY7b29xGn

This is not the first glimpse of Deadpool 2, earlier we saw Deadpool failing to prevent a back-alley robbery/murder because he was busy putting on his super suit.

Deadpool is all set to release on June 1st, 2018. The Indian release has yet not been declared.​

Until then we hope these help: