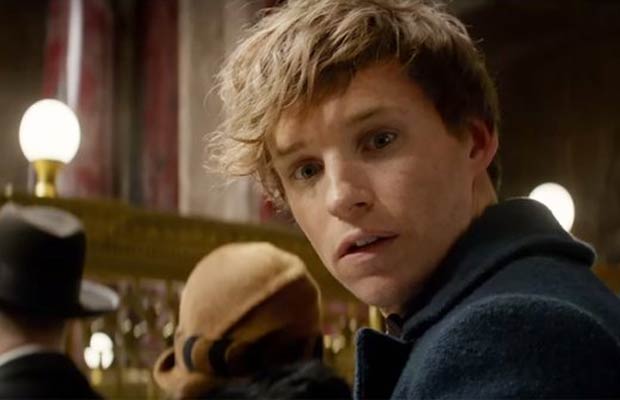 [tps_footer]It has been five years since we said goodbye to one of the most beloved movie series, ‘Harry Potter’. Since that time, every Potterhead has been waiting for a sequel or prequel or some book to come out. When J.K .Rowling announced that she is working on the prequel book, fans were delighted. Then came the news that the prequel book has been picked up for a movie and Eddie Redmayne is the lead of it.

The first trailer of ‘Harry Potter’ prequel ‘Fantastic Beasts and Where To Find Them’ was released yesterday at MTV Movie Awards 2016. The first trailer for the upcoming magical film brings back so many Hogwarts memories. Even though the prequel is set seventy years before the actual saga took place, it does take us to the magical world which everyone has been missing.

Set in New York seventy years ago, the first trailer for the prequel invokes two familiar names- Hogwarts and Albus Dumbledore. We learn that Newt Scamander ( Eddie Redmayne) was expelled from Hogwarts despite getting endorsed by Albus Dumbledore himself. He is now trying to smuggle something in his briefcase in New York city. One thing that has been understood from the trailer is that the briefcase plays a central part in this magical world. It contains a number of creatures who will escape and cause a destruction of the wizarding and muggle worlds.

Here are the things we need answers for: What is that creature coming out of Newt’s briefcase we saw for a brief moment? According to the book, Newt graduated from Hogwarts. Then, why the trailer mentions that he got expelled? What did he exactly do? Do we actually get to see Albus Dumbledore and Grindelwald.