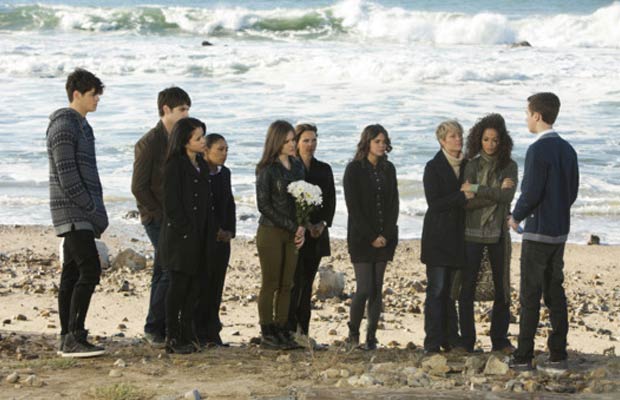 [tps_footer]The entertaining musical episode of ‘The Fosters‘ last week focused on the story of ‘Romeo & Juliet‘ until things went sideways. Jude’s new friend Jack was found dead at his new foster home. The abusive foster parent took the kid’s life and once again, the foster-care system failed a kid.

In the finale, the entire Foster family mourned the death of Jack as he didn’t way a family. Justina, who is helping Callie find homes for people through her Fost and Found app, had organized a launch event. Callie didn’t feel like going as she was still grieving Jack‘s death. Callie‘s close friend Daphne gave her enough evidence that privatization would ruin foster kids and Justina was receiving big paychecks through it. Also, Justina was the one who found Jack an abusive Foster Home. During the launch, Callie publicly called out Justina and had enough evidence to prove that she was in it just for profits. Justina couldn’t deny it and it was bound to happen that she would retaliate.

To get back at Callie, Justina published the story on Callie‘s app of Brandon’s restraining order from Callie that the Fosters parents- Lena and Stef had filed few years ago when the two fell in love. Now as foster siblings, all eyebrows were raised that they slept together. Lena and Stef decided to file a complaint against Justina when Callie was surrounded by paparazzi about the same. Then came a major shock, when Callie came out clean that she, indeed, slept with Brandon because they thought she was never getting adopted.

As for Mariana and Matt, who confessed to each other during ‘Romeo & Juliet‘ play that they were still in love, things didn’t end well for them. Brandon made them understand that they should not be selfish and hurt the people they really care about. Keeping this in mind, Matt and Mariana decided to end it with a goodbye kiss which Mariana‘s current boyfriend Nick. Thinking they are back together, Nick flipped out and burned down the set of ‘Romeo & Juliet‘. Later, he found a gun in his glove compartment and brought it to school.

Also, Brandon was not only the one problem in this episode. Jesus‘s father Gabe was still in trouble for working at a place where all under age kids were present. Jesus said to the police that Gabe helped with the construction and that’s it. Looks like Gabe is still on the s*x offender list and his problems won’t end anytime soon. Lena was also questioned about how she allowed an offender to work for the school kids.

Jude, who couldn’t handle the loss of Jack, started to question his s*xuality. He kept wondering if he is gay or not as two boys left him.

Lastly, Brandon hooked up with Courtney after she lost her home and all the money to her ex-husband. Brandon helped Courtney with a place using his Juilliard deposit which he won’t be using anymore I guess.

Questions that should be answered next season- Now the truth is about Callie and Brandon is out- will they get a chance to get back together? What will happen to Callie‘s boyfriend AJ and Brandon‘s girlfriend Courtney? Will Stef and Lena forgive them? What about Nick carrying a gun to school?

We will have to wait until the next season.[/tps_footer]