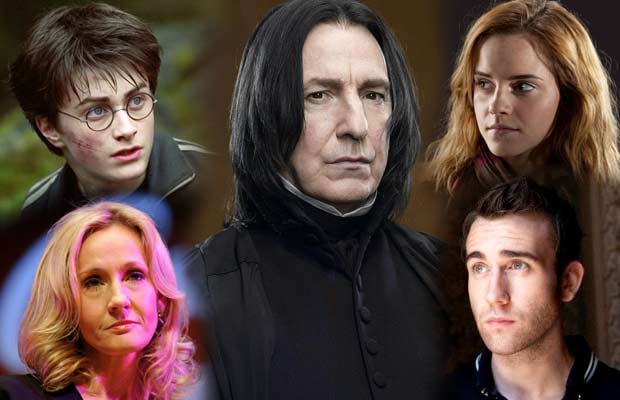 [tps_footer]Alan Rickman who is popular all over the globe for his character of Professor Severus Snape in the ‘Harry Potter’ series died at the age of 69 in London on January 14th. One of the most influential characters Snape surely made a mark in everyone’s hearts. Not only are all the fans deeply saddened for Alan Rickman’s demise, the stars of the ‘Harry Potter’ series are also highly emotional for the same.

There have been no reports about Alan’s illness but it is being reported that he was suffering from cancer and lost battle to the same. Alan Rickman’s screen presence was enigmatic and the actor was always applauded for his characters.

Alan Rickman’s death is surely a huge loss of talent and who would realize this more better than the star cast of the ‘Harry Potter’ series. Stars Daniel Radcliffe aka Harry Potter, Emma Watson aka Hermione Granger, James Phelps aka Fred Weasley, Oliver Phelps aka Percy Weasley and many others have confessed their wholehearted feelings for Alan Rickman’s demise. Here is what the ‘Harry Potter’ stars have confessed on various social networking sites 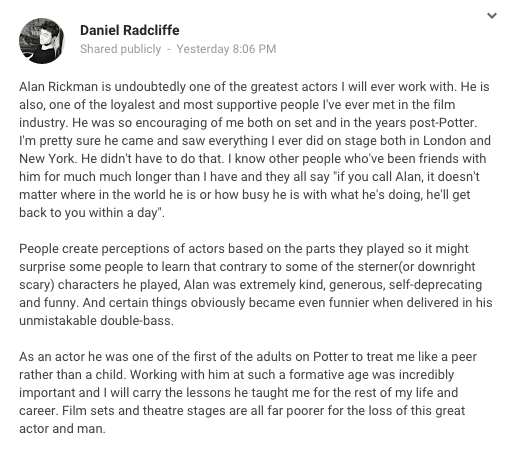 Emma Watson says, “I’m very sad to hear about Alan today. I feel so lucky to have worked and spent time with such a special man and actor. I’ll really miss our conversations. RIP Alan. We love you.” 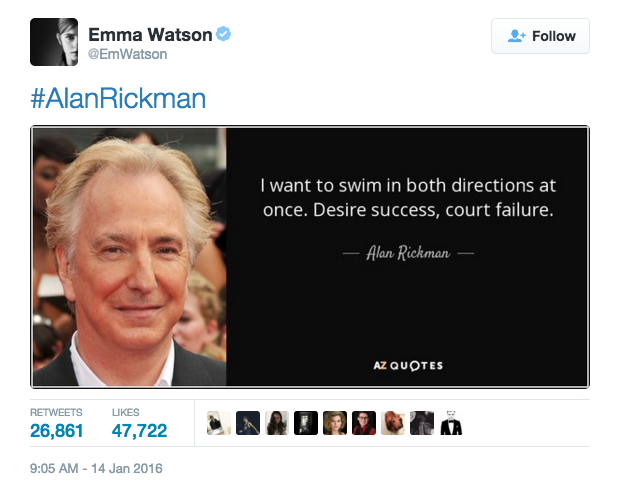 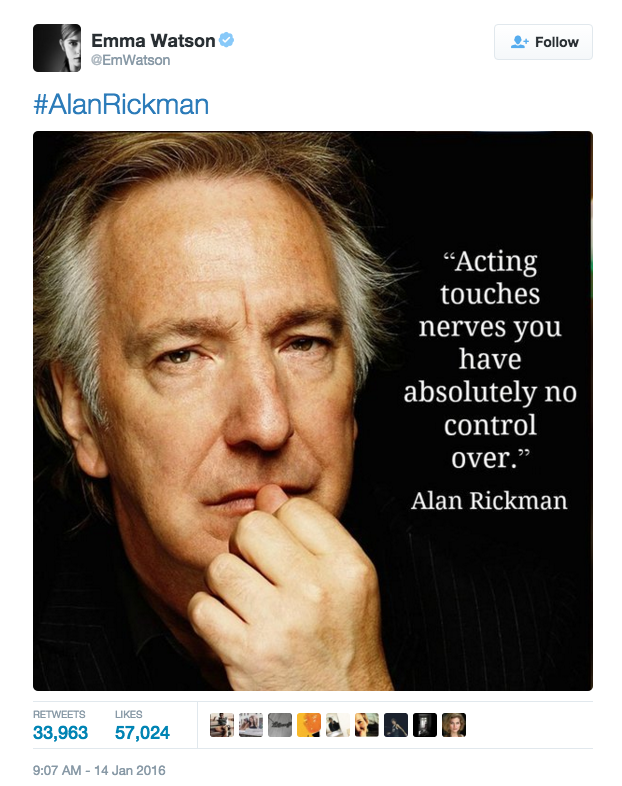 J K Rowling confesses, “There are no words to express how shocked and devastated I am to hear of Alan Rickman’s death. He was a magnificent actor & a wonderful man.” 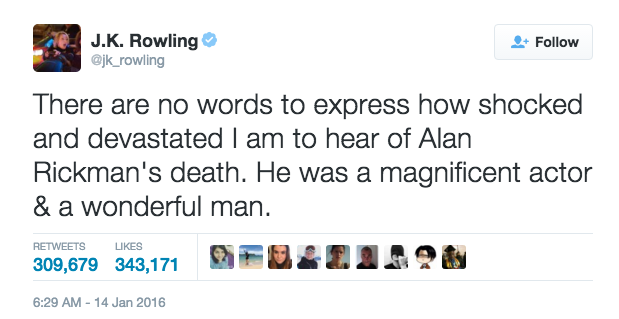 My thoughts are with Rima and the rest of Alan’s family. We have all lost a great talent. They have lost part of their hearts.

Matthew Lewis stated, “I was at Leavesden Studios today when I heard the news. As I walked through the canteen I thought of Alan queuing up for his lunch with us mere mortals. I recalled the trailer in which he offered me some of the greatest advice I ever received about this mad profession we shared. Being back in those corridors made me remember a lot of things and I will treasure those memories all my life. He inspired my career more than he ever knew and I’ll miss him.” 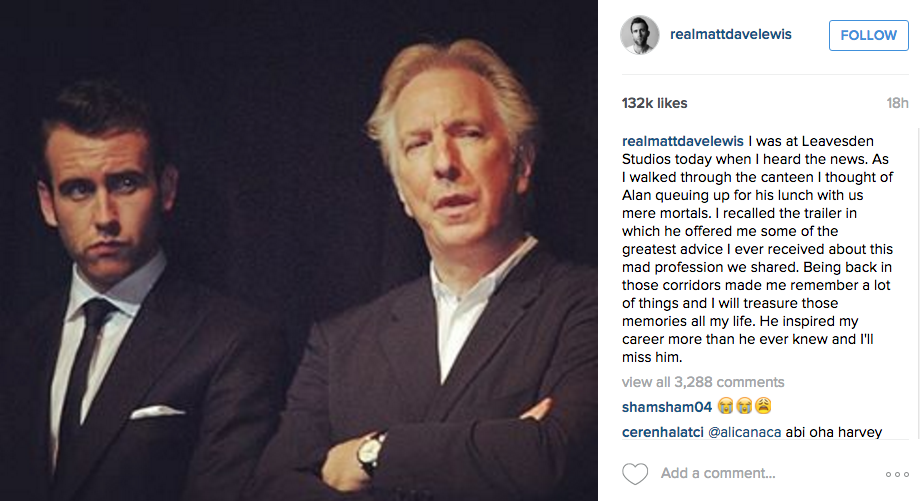 James Phelps said, “Shocked & sad to hear Alan Rickman has passed away. One of the nicest actors I’ve ever met.Thoughts and prayers with his family at this time.” 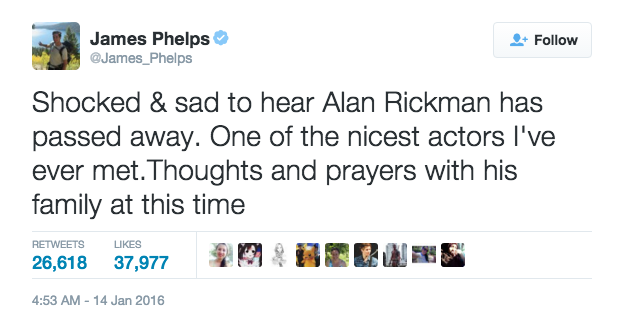 Oliver Phelps posted, “Terribly sad news about the passing of Alan Rickman. A funny and engaging person who put a shy young actor at ease when I was on HP.” 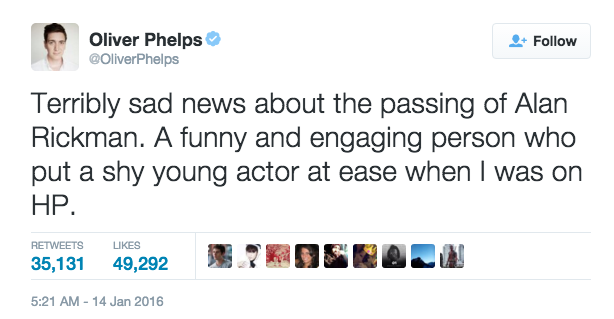 Chris Rankin posted, “Just had awful news of Alan Rickmans death. Utterly devastated. Nothing more to say at this time.”

The world has lost one of its greatest and kindest actors. #icon

From our random convos to your love of scrambled eggs to you scaring me as Snape on set-Thank you. #RIPAlanRickman 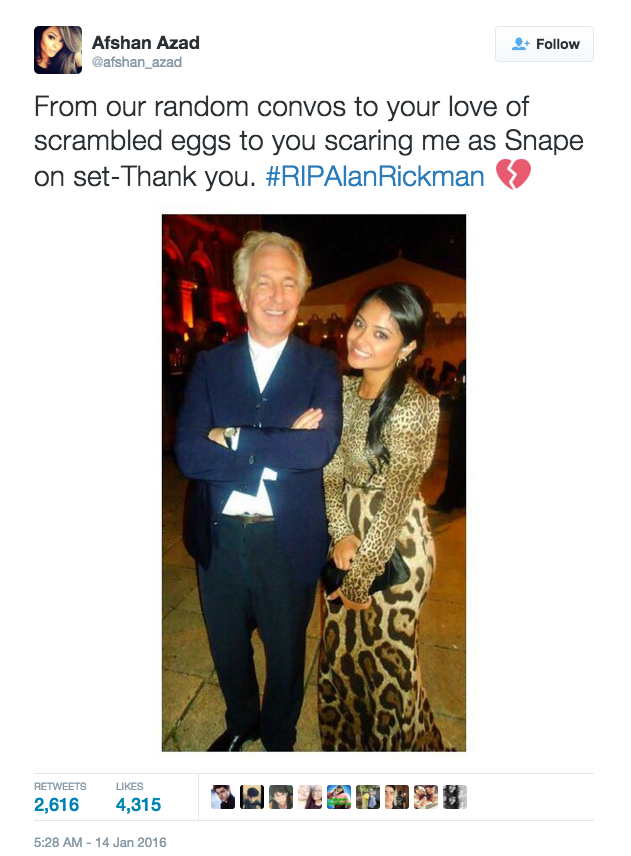 Devon Murray said, “Today a friend, a role model and a truly amazing person lost his battle. I have so many good memories. #Always #RipAlanRickman.” 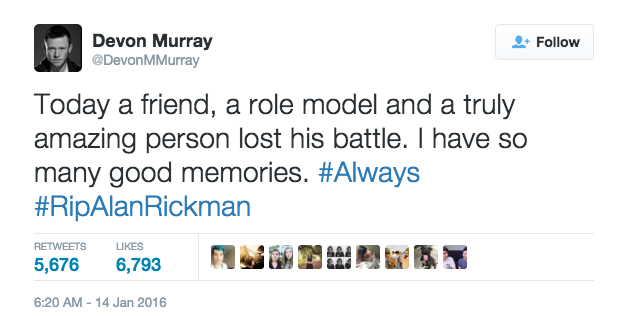 Jason Isaacs confessed, “Heartbreaking news about lovely Alan. Nobody else could be as hilarious, tragic, terrifying & truthful all at the same time #RIPAlanRickman.” 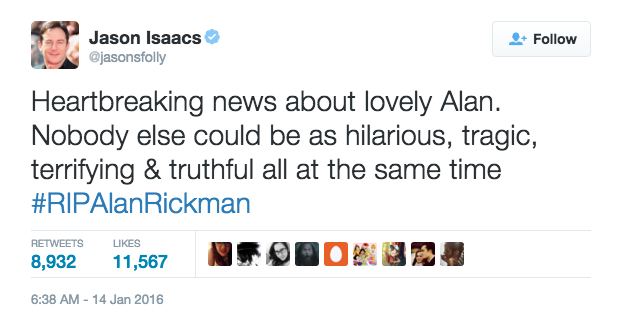 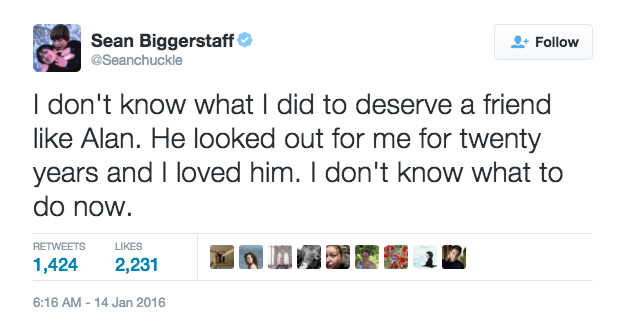 Louis Cordice tweets, “#rip #alenrickman amazing actor, to have met & worked with him after watching his films growing up was a honour.” 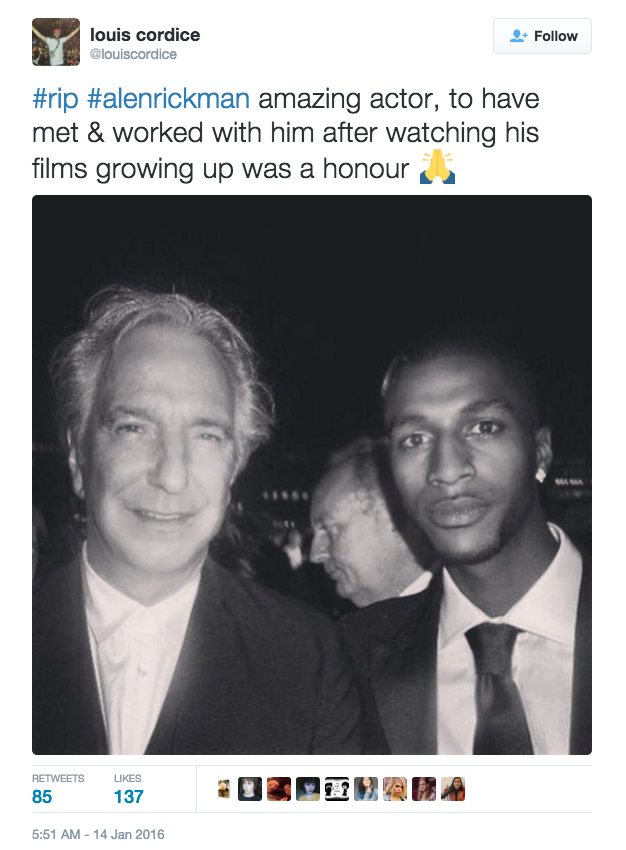 Anna Shaffer tweeted, “I remember sitting with Alan Rickman at lunch and literally being able to feel talent throbbing from him, it was so terrifying & wonderful.” 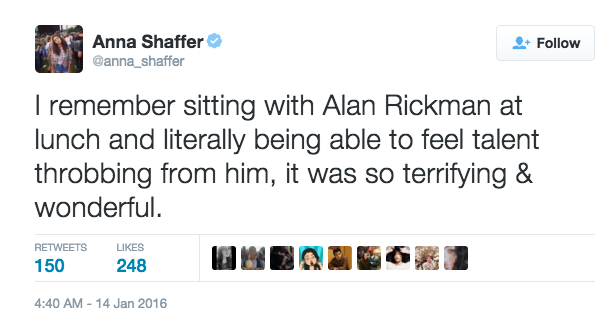 Harry Potter Film page posted, “We are deeply saddened to hear of the passing of our beloved #AlanRickman who played #ProfessorSnape (1/2) 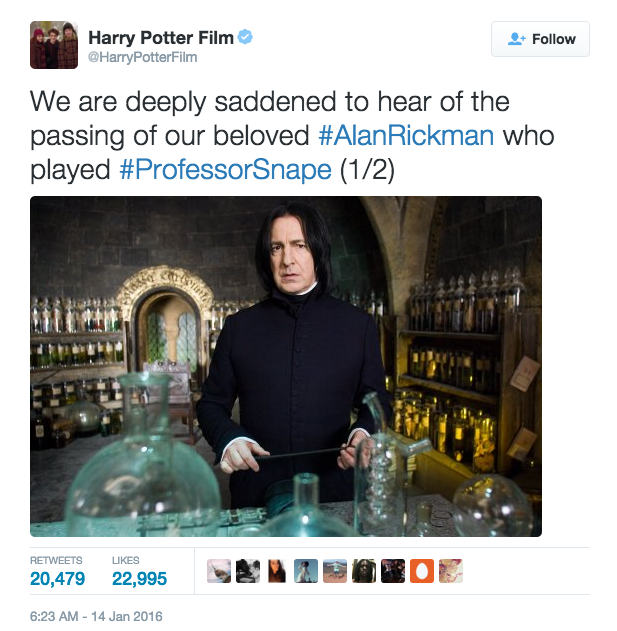 Harry Potter fans will miss Alan Rickman very much. He was a wonderful actor and a very dear friend. (2/2)