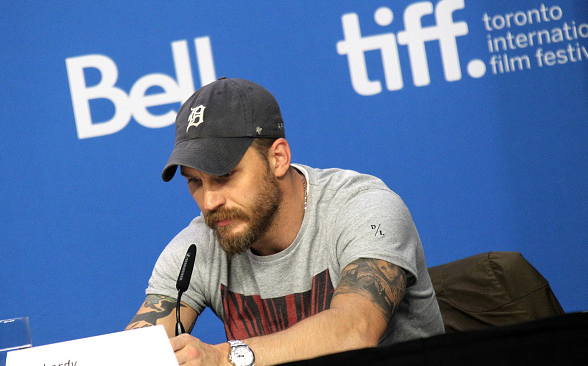 While the news of Hugh Jackman retiring as the comic character Wolverine has upset many of his fans, the question of who will be the next Wolverine have already sprung up. And the actor himself is no stranger to this question as Hugh has time and again been asked his opinion about who should play the iconic character next. While he managed to dodge the question for long, Jackman has finally given a name and that is none other than Hollywood hunk Tom Hardy!

In a recent interview Hugh was shot with the same question as to who will be the next Wolverine. To which the actor very wittily answered that he doesn’t want to make the studio’s job to find a replacement easy by giving away any kinds of hints! Although the actor further added that one actor has already been secretly approached. According to Hugh he thinks ‘Mad Max: Fury Road’ star Tom Hardy would be a suitable choice to continue the legacy of Wolverine. Well, we second that thought!

Tom Hardy who shot to fame after his portrayal of Bane in Christopher Nolan’s ‘The Dark Knight Rises’ has become a personal favourite of all the directors. When you’re talking about action packed films that require a body building hunk, Tom’s name will surely pop up in your mind. Wolverine just happens to be one of such roles that Tom Hardy can easily pull off, thus it’s only apt that the iconic Wolverine player Hugh Jackman himself suggested his name.

While announcing his retirement as Wolverine, the 46-year-old actor who has been associated with the franchise for almost 17 years now stated that it felt like the right time to retire from the superhero’s role. The actor further added that he had never in a million years thought his association with the character would go on for 17 long years. ‘X-Men: Apocalypse’ is set to release on May 27, 2016 and with the recent announcement, ‘The Wolverine 2’ is scheduled for a March 3, 2017 release. Hugh Jackman’s film ‘Pan’ is all set to release on October 9, 2015.