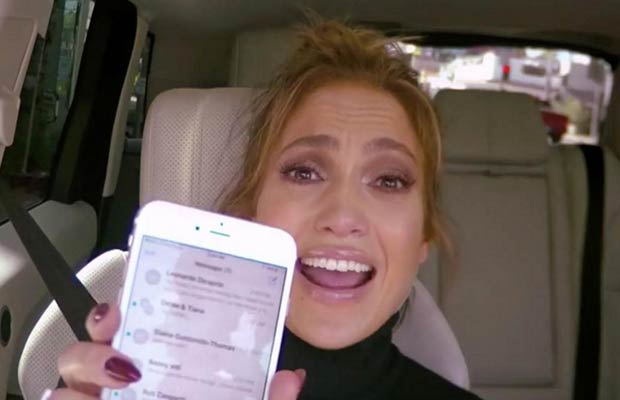 [tps_footer]’The Late Late Show’ talk show host James Corden started a rather entertaining segment on his show called the ‘Carpool Karaoke’ last year. Since then, the segments popularity has just increased. From Adele to Justin Bieber, many known faces in the music industry have featured on it.

In ‘Carpool Karaoke‘, James picks a guest from their place and goes on a long ride interviewing and singing along with them. The segment started off with Jennifer Hudson and Mariah Carrey. But, the third guest on the segment was Justin Beiber and that video went viral, instantly.

On March 29, 2016, ‘Carpool Karaoke‘ segment got it is own primetime special starring American Idol judge and singer, Jennifer Lopez . The segment started off with the duo branding a new nickname- J.CO. Then, they jammed hard on all of JLo’s hits of all time including ‘Love Don’t Cost a Thing‘, ‘Jenny From the Block‘ and ‘On the Floor‘.

Both of them were having a great time until James decided to pull a prank of all time. He took JLo‘s phone and started scrolling through her A-list contacts. He landed upon a name who is the biggest celebrity of Hollywood- Leonardo DiCaprio. Ofcourse, James couldn’t let this opportunity go and decided to leave a text on behalf of JLo. The text said “Hey baby, I’m kind of feeling like I need to cut loose. Any suggestions? Let me know, JLo. You know from the block.”

Jennifer thought he was just kidding until he pressed the send button. She cringed seeing that but found it hilarious too. Until, Leo texted back and both of them couldn’t hold their laughs. Leo replied “You mean tonight boo boo? Club wise?”

Oh well! Looks like Jennifer is going out with Leonardo. That was one teriffic prank. We wonder what was Leo thinking replying back.

Here is the segment. Skip to 9:40 where the prank actually begins.