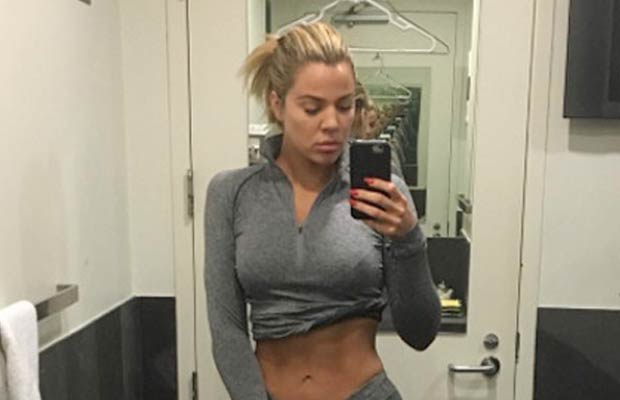 [tps_footer]In February this year, Khloe Kardashian posted a post-workout selfie on Instagram and within a few hours, she was on the receiving end of a lot of hate and criticism from followers. The reason for this stream of outrage was that a slight bend near the door frame in the image was a dead give-away that the image was Photoshopped.

After people called her out for her Photoshopping, she shortly posted the original, non- Photoshopped version of the image with the caption “If only hatin burned calories how dope yall would be. Too bad it doesn’t. Here’s the OG shot. The petty movement ain’t cute. Oh and I almost forgot…Namaste.”

While the controversy died down shortly, the reality star has now come forward with an explanation for her actions. On her app, she wrote – “To this day, I remember the exact streets (Ventura Blvd. and Coldwater Canyon). I was speeding and the other car ran a stop sign. I was was wearing my seatbelt but the strap was under my armpit. I was in a small Mercedes and it compacted in the wreck. My head and upper body went through the windshield and my legs were stuck under the steering wheel.”

Reports suggest that Khloe went through a few reconstructive surgeries and since then she has had to wear a brace when she works out as a precautionary measure. “Whenever I post a picture of my legs on Instagram, everyone comments on how fucked up my knees look. My right leg is an inch and a half thinner than my left because my muscles deteriorated and never recovered. Yes, I did Photoshop it, but I was trying to make my thinner leg look bigger to match my other leg!!! All I want are big, thick thighs and I hate how skinny my legs are.”

Looks like her explanation will give her fans some much needed relief.[/tps_footer]