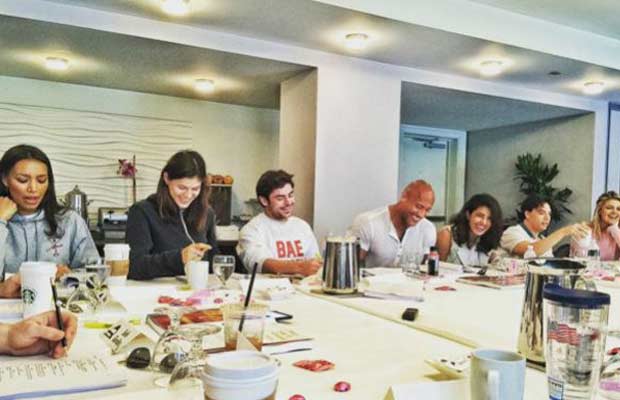 [tps_footer] Priyanka Chopra, has multiple projects to deal with. She started in the West with her Television series “Quantico” and now after it’s tremendous success, she is gearing up for it’s second season. Good luck with that Priyanka! And here, in India, desi girl has a new release “Jai Gangaajal“, which is directed by Prakash Jha and we will see Pee cee in a dedicated Cop role. Plus, she has bagged her first Hollywood movie “Baywatch” opposite Dwayne Johnson a.k.a The Rock, Zac Efron and many more.

Here is what Peecee said about imagining herself on the beach. “I have grown up watching the show with those people running on the beach in their red swimsuits, and now, I am one of them.” Heyyy Peecee, we are feeling the same way here. It will be a delight to watch you playing a negative character after so long and will be waiting to see who wins in the end but I am sure many will lose their hearts for you.

It’s not just us and Priyanka Chopra, who are wishing for Baywatch to get completed and release soon, check out what Dwayne Johnson has to say with this tweet after posting a pic with the entire cast of the movie. Peecee is Sooo happy and can’t stop smiling but can’t ignore Dwayne‘s excitement either.

Like a proud papa silverback, just look at this talented cool/hot #Baywatchcast..@ilfenator,@alexannadaddario,@zacefron,@priyankachopra,@kellyrohrbach,@thejonbassand some tatted up, bald brown man with a large head. This squad has been working extremely hard for months for these roles – the time has come – we start shooting TOMORROW. Let’s roll and bring the world some beach fun. #BAYWATCH#LifeguardsOnDuty

Wowww !! So a new journey will start for Priyanka Chopra. I am more excited to see her doing all the stunts and actions. She is a beauty queen but “not a delicate darling”. Have seen her trailer of “Jai Gangaajal” where she’s hitting all the goons with lathi in her hand. Watch out Dwayne, Priyanka Chopra‘s killer looks are also enough to melt her opposition.[/tps_footer]