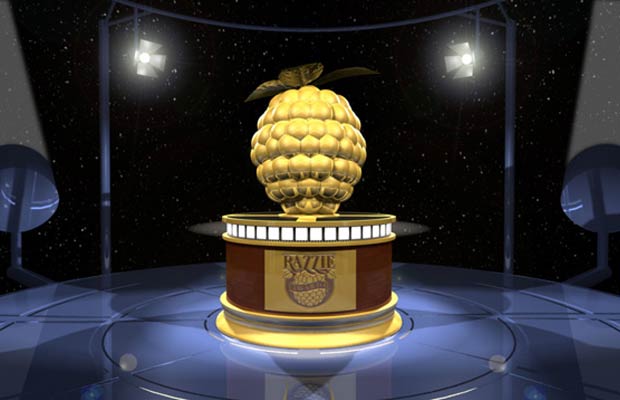 [tps_footer]We bring to you, latest news about the Golden Raspberry Awards a.k.a Razzies Awards and the list of worst movies and performers according to them. It’s a pretty controversial award show that usually happens before the Academy Awards. Why should only the best movies and performers be appreciated, they don’t mind taking a dig at the worst movie and performers. Like we have Nariyal awards, Baalti Awards and many more kinds of it, in our Indian Awards shows just to take a dig at not-so-praise-worthy performances. But that’s just a funny segment that different hosts perform at various awards shows in India, and there in the West, they have Razzies Awards, a full fledged list of awards to be given to all the movies and actors that bombed the silver screen and box office with performances not worth watching.

Don’t know if you will be surprised to know this or not but Fantastic Four has won three awards, including tying with Fifty Shades of Grey as the Worst Movie of 2015. Fifty Shades of Grey was really in demand, at least in this award show, by earning five Razzies. But that’s just the start. Jupiter Ascending, Paul Blart: Mall Cop 2*, Pixels are also the movies that have made up to the list of Worst Movies of 2015 list.

Now get ready to know who are the international actors who have unfortunately made it to Worst Actors Of 2015 list. The first one might hurt but it’s Johnny Depp in Mortdecai, who has topped the list. Then, Jamie Dornan for committing the sin of doing Fifty Shades of Grey, Kevin James for Paul Blart: Mall Cop 2, Adam Sandler for The Cobbler and Pixels, super hot Channing Tatum in Jupiter Ascending. Well, many of them are our favorites but Razzies didn’t spare them.

Male actors have already faced the heat now it’s turn for female actors to do ‘sach ka saamna’ on an international platform. So, the first female actor bagging Razzies award is Katherine Heigl for her performance in Home Sweet Hell. Dakota Johnson for FiftyShades of Grey, no surprise. Mila Kunis for Jupiter Ascending, now she can say same pinch to Channing. Guys even Jennifer Lopez received this award for The Boy Next Door and the beautiful plus outspoken Gwyneth Paltrow won for Mortdecai.

The list for Worst Supporting Actors is also here, the first award is to Chevy Chase for Hot Tub Time: Machine 2 and Vacation. Then Josh Gad won for Pixels and The Wedding Ringer. Kevin James for Pixels. Jason Lee for Alvin & The Chipmunks: RoadChip and Eddie Redmayne for Jupiter Ascending.

My God !!! This ceremony is hilarious and we hope all performers take it sportingly and give their best in 2016 and be spared at least next year from Razzies awards.[/tps_footer]