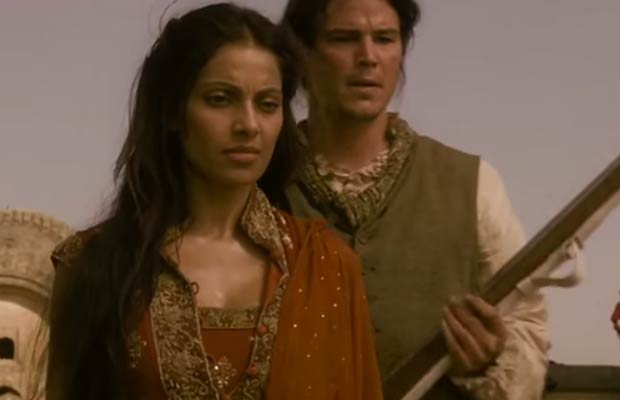 [tps_footer]Bollywood actress Bipasha Basu has been in the news for quite some time now since she announced her wedding to actor Karan Singh Grover. The actress is gearing up for the new phase in her life and is getting married on April 30, 2016.

Amidst in all these wedding celebrations, the trailer of Bipasha Basu‘s Hollywood debut film ‘Time Traveller’ dropped on April 19, 2016. We did know that the film was shot in 2012. Previously known as ‘The Lovers’ and ‘Singularity’, the film is being released this year by the name ‘Time Traveller’. Bipasha portrays the character of a Maratha warrior named Tulaja Naik with whom Josh Hartnett’s character falls in love with. The actress is seen in a no-make-up look for most of her scenes in the film.

‘Time Traveller’ is written and directed by Academy Award-nominated filmmaker Roland Joffé. The film presents a story of a romantic adventure epic set across continents, history and time. The film also stars Tamsin Egerton in leading role. ‘Time Traveller’ has finally received a release date after being screened at numerous festivals. It is scheduled to be released in the UK on Monday 25th April 2016.

Here is the synopsis of the film:

“Unfolding across multiple centuries and continents, this breathtaking epic time travels to 18th century India and beyond to tell a sweeping saga of treachery, betrayal, and love that defies all boundaries. Josh Hartnett stars as present-day marine archaeologist Jay Fennel who, following a diving accident while rescuing his wife, is left brain-dead. In his comatose dream state, Fennel is transported to India circa 1778, where a young British captain (also played by Hartnett) embarks on a life-threatening mission and a steamy romance with a female warrior (Bipasha Basu).”
[/tps_footer]