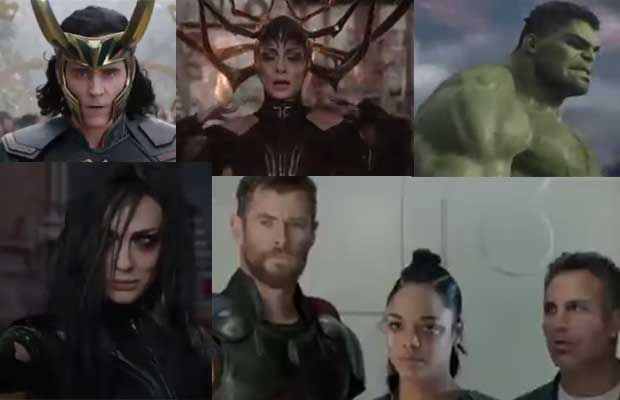 The new international trailer for the next Marvel series ‘Thor: Ragnarok’ is here and we can’t stop watching it!

The Marvel Universe has been doing very this year, with buzz about ‘Infinity War’ and ‘Thor Ragnarok’. They also recently released ‘Spiderman: Homecoming’ which has won several awards for being the movie of the year.

‘Thor Ragnarok’ has released a new Japanese trailer. Australian Actor Chris Hemsworth aka ‘Thor -The Thunder God’ has his own kick-ass plans for his Asgardian world.

Enemy of the magical universe, ‘Hela’ – Goddess of Death (Cate Blanchett) is back to take over the realm. (She also crushes the famous Mjolnir into tiny pieces as seen in the first trailer.)

The new trailer did show some already seen footage from the San Diego Comic Con trailer last month. The movie is said to be an explosion of egos and power play. We do see more of Dr. Bruce Banner not as Hulk in the movie.

With a new villain to fight off this time, Thor has teamed up with his brother the ‘God of Mischief’ or better known as ‘Loki’. While both of the brothers have always been at loggerheads with each other in previous marvel films, this time they manage to stay together.

But the entry of Doctor Strange has fans going crazy. Doctor Strange is a sorcerer capable of messing with time and other aspects. He advises the Asgardian God of the changes in his future. The scene shows Thor with his long locks and his hammer so we assume all is still well. But the next cut in the trailer shows the beloved Mjolnir into dust.

“Thor, I sense a great change in your future. Destiny has dire plans for you, my friend,” says Doctor Strange played by actor Benedict Cumberbatch.

We wonder what role Doctor Strange plays in this completely different timeline. Some believe this could be a base entry for a bigger role in the upcoming gigantic marvel movie ‘Infinity War’

‘Thor: Ragnarok’ will hit theaters in October in the U.K and Australia and a month later in November for U.S fans.