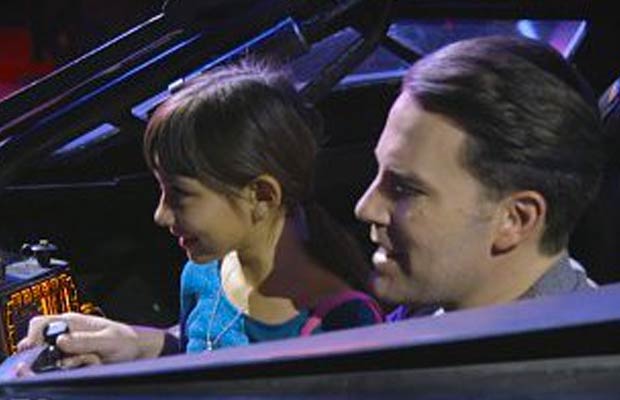 [tps_footer]Hollywood actor Ben Affleck is the new Batman in the upcoming movie, ‘Batman v Superman: Dawn of Justice’. Henry Cavill and Ben, both, are on the promotional tour for the film. The actors have been promoting the movie through funny skits and surprise appearances for charity purposes.

A recent video was posted on Omaze where Ben surprised his fans on his Batmobile for charity purpose. He was at the Warner Bros. lot sitting inside his Batmobile while the tourists looked around. The tourists, who were given the tour of the Warner Bros, were pretty picky when it came to age old question- ‘Batman or Superman?’. Most of them would choose Superman and Ben would just pop out the door of his car leaving everyone in shock. Many of them couldn’t believe when they actually saw him. One woman actually asked, “Are you for real?” The kids couldn’t be more happy. Some Superman fans might have changed their sides too.

Next, it was time for Batman to take the Batmobile on the road. A group of people visiting the studio where asked the same question when Ben stopped his car his and surprised them. He also took of his fan on a spin around the Warner Brothers studio lot. Now, isn’t that cool?

Directed by Zack Synder, ‘Batman v Superman: Dawn of Justice’ story presents Superman as a threat to the world because of his actions while Batman decides to take on him to prove what kind of hero the world really needs. This embarks Batman vs Superman that gives a new villain Doomsday aka Lex Luthor to create new threat to mankind. Keeping their differences aside, Batman and Superman unite along with Wonder Woman to stop Lex Luthor from destroying everything. Lex Luthor is played by Jesse Eisenberg and Gal Gadot plays Wonder Woman. The film releases on March 25, 2016.

Check out the video here!