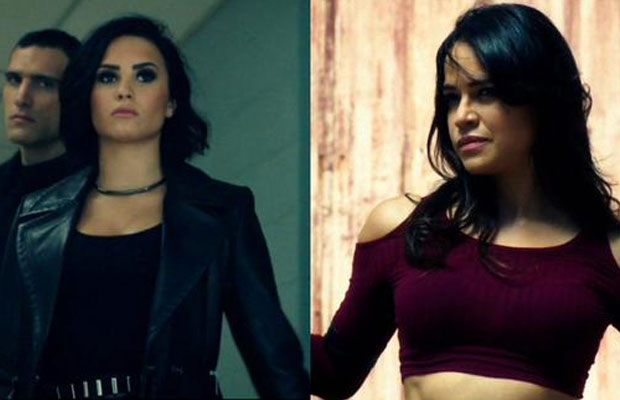 Hollywood pop star Demi Lovato has shattered all the records of making the most terrific music video! Her new music video ‘Confident’ featuring ‘Furious 7‘ fame actress Michelle Rodriguez has set new standards in the world of music videos. The two divas have very boldly delivered great action stints in it. While we expected Michelle to be amazing in her fighting skills, Demi Lovato surprised us with her acting in the video.

‘Confident’ music video is no less than a short film. Along with Demi’s marvelous singing skills, the music video’s story keeps us engaged till the very end. The peppy track shows Demi as a prison inmate in the beginning where she looks good even in that rugged no makeup look. She then becomes a criminal turned agent for the government who is hired to trace down Michelle Rodriguez.

The story becomes interesting when Michelle also turns out to be a government agent, and in the end when Michelle and Demi both find out that the government set them up, they go rogue and destroy the bad guy. In short, it is one kick*ass video for sure! What amazed us is the way Demi has performed in the video. So much so that fans are saying her ‘Confident’ has surpassed all levels set by Taylor Swift’s video ‘Bad Blood’.

Robert Rodriguez directed the music video that features appearances from Michelle Rodriguez, Jeff Fahey, Zane Holtz and Marko Zaror. Actress Michelle Rodriguez who starred in the blockbuster film ‘Furious 7′ might soon appear in the film’s 8th edition too which is currently in its pre production stage. We totally loved her avatar as a strong fierce undercover agent in Demi’s video. ‘Confident’ is Lovato’s upcoming album and this music video was the title song. She has also co-written the beautiful track. Take a look at it and tell us what you think!