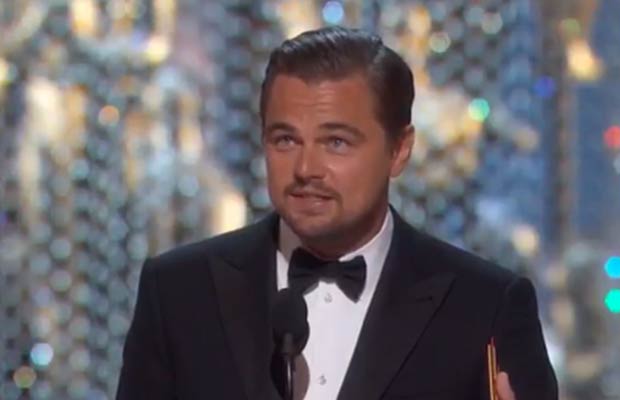 [tps_footer]Hollywood actor Leonardo DiCaprio attended the 88th Annual Academy Awards held at the Dolby Theatre on Sunday (February 28) in Hollywood. The actor was nominated for his brilliant performance in Alejandro Inarritu directed film, The Revenant.

The moment the world was waiting for over 12 years, finally happened when Leonardo won his first ever Oscars last night. This whole year he has been winning the awards in different shows but had never actually won as Oscar. 2016 marked his sixth Academy nomination and you know what they say- Sixth time is the charm.

Leonardo received standing ovation when last year’s leading actress winner Julianne Moore announced his name. Not only was he overwhelmed by the respect he received from the film fraternity but he also gave a powerful speech. He highlighted the issue of global warming by saying “Making The Revenant was about man’s relationship to the natural world…climate change is real. It is happening right now. It is the most urgent threat facing our entire species and we need to work collectively together and stop procrastinating.”

Being a humble man, he said “I am so grateful to the Academy for their recognition of this film. Making ‘The Revenant’ was one of the most rewarding and collaborative experiences of my life. None of this would have been possible without Alejandro’s talent, vision and determination. Our dedicated crew also deserves to share in this moment. Together, they have created a truly unique cinematic experience. Congratulations to all of my fellow nominees this season. Thank you to the Academy.”

The actor concluded his speech by saying, “I do not take this night for granted.”

Alejandro Inarritu also won Best Director for the film. This was his second win in last 2 years. Previously, Leonardo DiCaprio scored Oscar nominations for his roles in ‘What’s Eating Gilbert Grape’, ‘The Aviator’, ‘Blood Diamond’ and ‘The Wolf of Wall Street.’