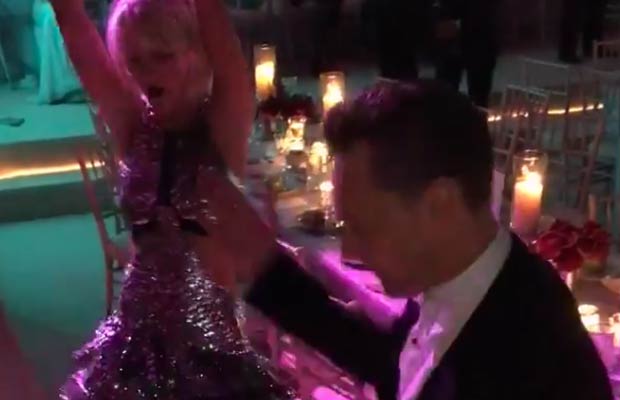 [tps_footer]Hollywood came together for one epic evening as they attended the 2016 Met Gala held at the Metropolitan Museum of Art on Monday (May 2, 2016) in New York City. It was that time of the year when celebrities showed off their extravagant style statements.

Big names including Taylor Swift, Selena Gomez, Zayn Malik, Gigi Hadid, Katy Perry, Lady Gaga and others brought some great fashion outfits to the Met Gala red carpet. But, we always look forward to seeing what happened inside the elite event. Tons of pictures, food, drinks and dancing all these things happened while we just got the glimpse of the red carpet.

But, we stumbled upon an inside video that was doing the rounds of the social media. Taylor Swift who was the co-host for the evening couldn’t stop herself from dancing. After doing her hosting job, the celebs went dancing. But, we know Taylor never says no to dancing. The 26-year-old singer was seen breaking some major moves alongside hottie Tom Hiddleston. ‘The Night Manager’ actor was seen showing some serious dancing skills as he was joined by Taylor. Both of them looked very serious about it while dancing to T.I.‘s hit song ‘Bring ‘Em Out.’

Keeping with the Manux X Machina: Fashion in an Age of Technology theme, Taylor wore an edgy metallic dress from Louis Vuitton with black strappy boots, and a clutch. Tom Hiddleston wore a traditional tails coat and looked dapper in his suit.